I know everything about Mexico now 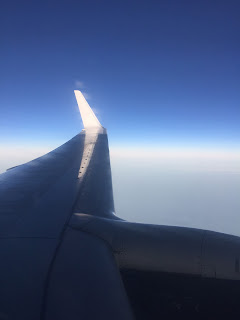 There comes a moment when you realize you're in over your ex-pat head, that you're about to be more "fish out of water" than "happy." It came surprisingly early for me this time around, much like how your second baby birthing usually goes way faster than your first.

It came this time while sitting in the Denver airport waiting to board our Aeromexico flight to Mexico City. Alex had taken the children to buy junk food so I was left alone for a rare non-distracted minute. That's when I noticed everyone around me was speaking Spanish with great enthusiasm and at seemingly superhuman speed.

I understood nothing; none of them were using the fifty or so basic Spanish words and phrases I know, at least not in ways I could readily understand.  What, none of them needed to say "I like bananas" at that very moment?  I find that hard to believe.

During the flight, our flight attendant spoke only Spanish.  She walked the aisle handing out customs forms at the very moment Alex went to the bathroom so I had to handle the customs forms situation by myself. She tried to hand me just one form so I tried to tell her I needed "mas, mas" and pointed around at, I thought, just Lucien and Coco. Then she said a bunch of stuff I didn't understand so I just nodded, which I tend to do when I'm nervous about a foreign language, and then suddenly I had 100 forms in my lap. I was keeper of all the forms for everybody, everywhere.

In that moment, a few truths returned.  Those truths had mellowed and gone soft and rosy around the edges since our return from Paris over five years ago but that familiar, "ohhh dang" feeling brought them back into sharper focus.  This international move isn't going to be all fun and games and glamour and excitement.  It's also going to be hard work and confusion and occasional feelings of "I am absolutely alone in this world."

It ain't my first rodeo and while I'm very happy to be participating in a second rodeo, riding that damn bucking bronco hurts, especially the times you get bucked off and are suddenly on the ground eating mouthfuls of dirt.  It's humbling stuff.

The title of this post is a lie, obviously. I know zero truths about Mexico thus far, only a few anecdotal things such as Carlos is a nice man and our new apartment occasionally smells like raw sewage. 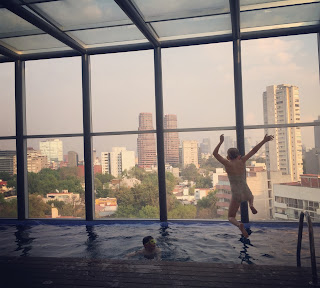 the penthouse pool is incredible but if the plumber can't figure it out,
we're moving soon.
please advise how to break that one to the kids.

But I still know everything I need to know about how it's going to go down in Mexico. I'm going to love parts and hate parts, will have days I'm on top of the world to be here and in love with everything around me and days I wonder incredulously how this country continues to function. Eventually we'll get settled and comfortable, in this case maybe just in time to return to Seattle, and then we'll be sad to be going home so soon.

I will share one thing I absolutely do know as fact so far -- if you come to Mexico City, try to fly in after sunset because flying into Mexico City at night is one of the more jaw-dropping experiences you can have. The city, as the third largest in the world with over 21 million people, just goes on and on forever.  You can't even believe there's no more darkness, only lights and lights and lights.

Coco said it best, her mouth hung wide open as we lowered closer to the ground --"Sh*t, Dad, it's the most beautiful thing I've ever seen." Alex looked at me pretty firmly then, even though he shared her sentiment.

(I may say "sh*t" occasionally but so does Alex.  It's possible but not proven that one's on me. Thankfully everyone on the flight was still speaking uncomfortably fast Spanish to notice our poor parental modeling.)

I have another post to write soon regarding all sorts of things that have happened since we've arrived. It's mucho mucho stuff and we've only been here a few days.

One of the most important things to know is Lucien and I are trying to learn Spanish together using the Duolingo app. Yo como una manzana. That means I eat an apple; I know that now because I learned the verb "to eat" today.  Right after that, we needed to purchase some clothes hangers so I looked up the Spanish word --"perchas" -- so I could search them online.

I then began following Alex around the apartment saying, "Yo como los perchas."  I thought it was funny, combining my two new words like that, but it drove Alex surprisingly batty. "Why do you keep saying that?? WHY WOULD YOU EAT HANGERS?"  Sometimes that man doesn't understand me.

Email ThisBlogThis!Share to TwitterShare to FacebookShare to Pinterest
Labels: Mexico, moving, return of the ex-pat