Our doorman, Señor Scowly, hates Alex with the strength of a thousand suns, which for some reason makes Alex even more determined to befriend him. The more Alex talks, the more scowls Alex receives but he is not deterred!  He instead talks faster, believing he will win S.S.'s favor if he can just say more things. The faster he talks, the more he stumbles over his Spanish, and the more twitchy and annoyed Senor Scowly becomes. It's painful to watch.

I have dragged Al away by the arm more than once, even as he continues to chat over his shoulder, wondering how Señor Scowly's mother is doing and asking things like, "What's your favorite song? Do you like tamales? Does Mexico recycle? I like your shoes!"

S.S. seems to like me a little better, most likely because I never chat him up. He usually smiles at me at least every other time he opens the door for me, or at least whenever he's not glaring at some undetermined thing in the middle distance. 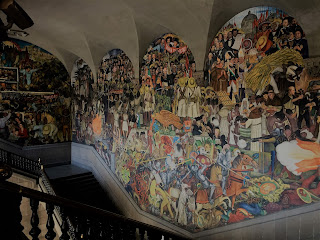 Diego Rivera's mural at the Palacio Nacional, which illustrates the history
of the Mexican people.
That communist sure could paint,
but Coco got bored and asked,
"Are we done looking at Diego Dorito yet?"

I sister marched in Mexico City, right outside the U.S. embassy, along with millions of other people who participated in the Women's March all over the world -- 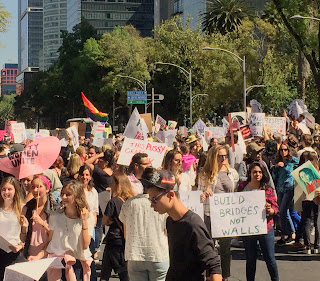 
You had to stay vigilant at the march due to the proliferation of high-fives between strangers. Be prepared to duck or else you'll get high-fived in the face, patriot

My country is being run by a madman who keeps doubling down on "horrifying." I wonder if Donald Trump will soon sign an executive order banning liberals from returning to the United States? If so, hola, Mexico, it's you and me forever. 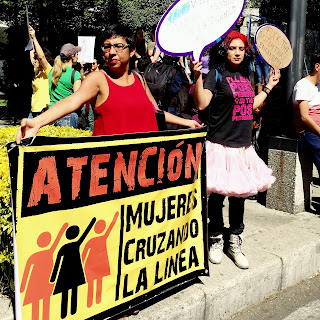 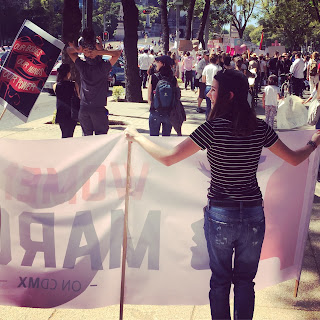 It's impressive how much the world hates this guy.

There was something else impressive about the traffic-clogging nature of our demonstration. Mexico City, like Paris, seems to be a city fairly used to demonstrations that shut down traffic (Vive la manifestation!). When it became clear our crowd was about to shut down the street by its swarming nature, police instead shut it down officially using frantic hand gestures, whistles, and eventually barricades.

I braced for the anger and the horn honking from the cars barreling our direction -- they were about to be stuck and for a very long time -- but there was none of that. Drivers instead, on Paseo de la Reforma, the busiest street through Mexico City with four lanes of traffic in each direction, began immediately and without much fuss to reverse their cars and turn around.

I couldn't believe it.  Al and I watched dumbfounded and transfixed as the police walked down the middle of the street, approaching oncoming drivers with whistles blaring and hands outstretched. The drivers got the message and all just immediately began performing three-point turns simultaneously. It was spectacular.

Within a handful of minutes, all the cars had headed back in the direction from which they'd arrived. There were even three buses in the bus lane that got the hell outta there with little trouble. Police stood at the next intersection directing traffic onto side streets. Paseo de la Reforma, for our block anyway, was empty. It was a bit apocalyptic, which fit the Trump situation pretty well. 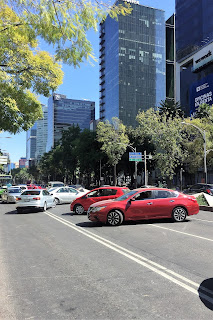 I didn't pull out my camera fast enough. This was five minutes in to the road closure.
Many are already gone and everyone else almost ready to be gone.
Mexican drivers know how to get sh*t done.
Mucho respect.

My Spanish is still horrendous, of course, but I'm picking up little helpful phrases here and there and learning some crucial skills such as saying "bottle of water" at restaurants versus just "water" because my family prefers to avoid the runs.

Spanish numbers are hard for me to understand yet are so often used. I've got 1-10 down pretty well but after that it gets fuzzy.  An ex-pat can learn how to ask, "how much does it cost?" but it isn't much help if the ex-pat doesn't understand the answer that comes flying back at her face.

A nice stroll through Chapultepec Park becomes stressful when one of the kids asks, "Hey Mom, can I buy that stuffed Pikachu over there with my own money?" or "Mom, can we buy some watermelon from the fruit vendor?" 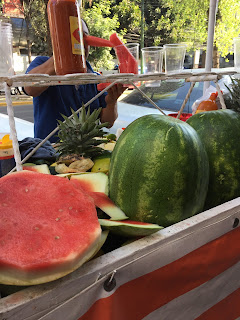 The watermelon and pineapple are delicious
but they will be sprinkled with chili powder and lime juice if you don't jump in there fast enough.
Sounds cool but....an acquired taste, perhaps.

I want the kids to have control over their spending and saving choices and I want them to have fresh fruit so to those questions I usually answer with a confident, "ummm, sure?" Then as we approach the vendor, I whisper, "OK here's the plan. Let's just hand him 100 pesos and see what he does. If he looks at us expectantly, hand him more money. If he gives us back change, just take it, whatever."

I realize this is a dangerous path and I will end up paying way more for things than I should but who cares, things are getting bought and Mama's getting it done.

Alex ran into an old co-worker, a very random but happy occurrence, at his immigration appointment last week. She lives in Mexico City now, a relative newbie as well, but here long enough to know a lot more than we do. She invited us on the spot to a brunch at her house last weekend.

The people at the brunch were mostly from Mexico but also from Columbia and Paraguay and Lebanon and others.  They are all fluent Spanish speakers yet when I walked in, they all switched to English to the best of their individual abilities. I made an entire party start speaking English just by walking in and standing there, I am drunk with my unilingual American power.

We are learning new things, little by little.  This week we learned if you go out for breakfast and they offer you a plate of croissants and other pastries, DO NOT grab one off the tray. The tray pastries are only presented for you to make your selection and the real thing will be delivered to you on a plate later.

But the four of us, because we're clueless exuberant types, all grabbed pastries off the tray when it was put in front of our faces. The tray holder at first frantically shook his head "no" then laughed so hard I thought he was going to collapse. He seemed to like us even more after that and even brought us extra pastries with a wink. They like you even more when you screw things up; it's upside down world in Mexico.

Gotta go pry Alex away from Señor Scowly before he gets strangled,
MJ
Posted by MJ at 1:07 PM