walk on that suitcase conveyor belt like a treadmill 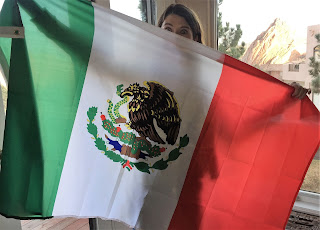 We left Seattle the day after I had a root canal. I climbed into the Uber on our way to the airport clutching an ice pack to my jaw and bemoaning my once again impeccable timing.

I have always had great ability to make already complicated things things even more complicated. Who else needs an emergency root canal the day before they move to Mexico? Who else has such an oddly abnormally stupidly structured tooth, according to the endodontist, that the procedure was going to take twice as long and recovery was going to be more lengthy and painful than for any other normal person?

If they could harness my immense ability to unintentionally complicate all of the things, I could power the world just by walking around and existing.

The bad news was I was in terrible pain the morning we left for the airport; the good news was I was drugged on Vicodin and Valium so I didn't even flinch when one of our suitcases came in over the accepted weight limit at check-in, which necessitated some shuffling of articles between suitcases.  That's something that usually sends me into panic fits because oh no, what if people waiting in line catch a glimpse of my old pile of undies?  (All those people in line are watching in such a situation and hoping for a glimpse of something embarrassing. Trust me, I know people.)

But this time, thanks to the Vitamin V,  I was more, "consider and enjoy all my underwear, people, I really don't ca -- oh oh oh, hey airline person, can I go back there and walk on that suitcase conveyor belt thing like a treadmill?  Because looks like wheeee..."

The movers came to pack our Mexico-bound belongings the same day I had the root canal. They were so friendly and kind as they carefully wrapped our clothing and computers and recently opened Christmas presents because they could tell I was not feeling well (a heating pad pressed over my entire face was their first clue) and I was once again zoned out on Vicodin so unable to make big decisions.

The movers informed me we still had room in our shipment container after they'd packed everything we'd set aside.  They said, "You still got plenty of room in here, ma'am, anything else you'd like to add?' I stared at them with unfocused eyes and mumbled, "Just take whatever you want."

A few long beats of silence followed as the movers glanced at each other in concern until one said, "Umm, I guess we can fill the space with more of your daughter's stuffed animals?" I gave them a thumbs up, said, "I knew you guys would figure it out" and went to sleep with my head down on the kitchen counter. 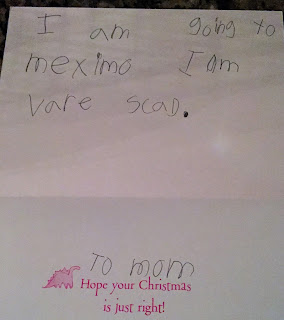 Coco, up until the very end, continued to slip festive Christmas cards
under our bedroom door
voicing her feelings about the situation
(sad)(scared)

Seattle Mom had the sweet idea to have a "graduation" party for Lucien on the last day of school before Winter Break. It was his very last day at his elementary school and he was achingly sad about it.

We invited Lucien's favorite classmates and their parents to Chuck's Hop Shop for his "5th Grade Graduation" party.  They brought graduation gifts and signs and a gigantic graduation balloon that, we hear from our housesitter, is nowhere near ready to deflate. That sucker's gonna be floating around Banister Abbey for a long time, perhaps even waiting for us upon our return. 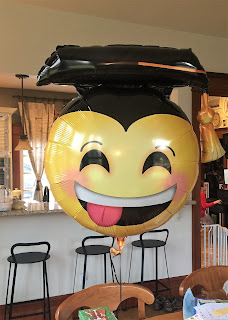 Chuck's Hop Shop is a beer shop in the neighborhood, which may seem an odd choice for a kid's graduation party but it's really not.  We've held birthday parties there, community meetings there, Lucien had his end-of-year soccer team party there. Chuck's is the neighborhood spot; it has over 50 craft beer taps and a rotating schedule of food trucks in the parking lot plus ice cream cones, bags of chips, Pac-Man and board games for kids.  It's a real crowd pleaser.

It meant so much to him that his besties showed up to celebrate him, and to give him a little closure on elementary school -- and I think we can all agree the tangerine IPA was surprisingly good. 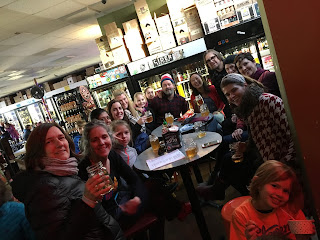 While I'm entering an emotional tailspin with that last tale, I might as well share an email I received on the last day of school from a friend who has a daughter in Lucien's class --

"Hey MJ,This morning as we left for the airport, here's how it went:Daughter: Mama! I'm bummed out about our class clown leaving us.Mom: Class clown?Daughter: Lucien. There are other funny kids in class, but they're sort of malicious. Lucien's just not. He's just fun. Every morning when teacher takes roll call, it goes:Molly? Here.Leo? Here.Micky? Here.Lucien? Potato.Mom: What happens then?Daughter: The teacher laughs every time. It's a really good way to start the day.

MJ, we'll so miss that potato. Best to you all."


I've since been informed Lucien's class has a plan for the first day back to school after break.  The class is going to wait until roll call is finished, during which Lucien's name will inevitably be skipped, then all yell together at the very end, "Lucien? POTATO!!!"

We went Christmas caroling with our crew before Christmas. We were a big group of over 40 people. We hired a teacher from the nearby music school to come play the piano so we could practice beforehand but the practice didn't matter much. We were awful. Who cares, let's hit the streets! 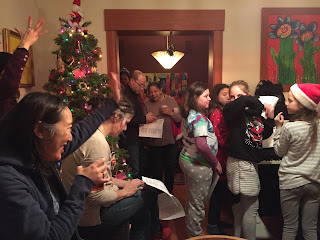 Many people enjoy carolers but more than a handful waved us away with panicked expressions, one even giving a frantic cut-the-throat gesture. One woman said she was Jewish so would feel uncomfortable but when we told her we'd also learned the Dreidel Song for just such a situation, she still wasn't into it.

We soldiered on in our somewhat unwelcome neighborhood caroling quest.  We hit Chuck's Hop Shop and caroled for the beer drinkers within and also hit the family-owned corner store where we all buy our six-packs and quirky birthday gifts before we head to each other's homes on a regular basis. 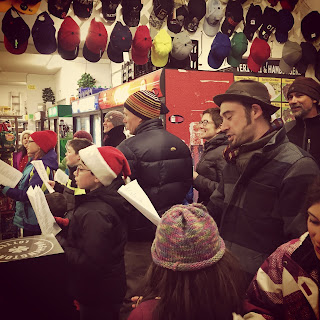 One of those hats hanging on the wall was purchased for me by my friend Rusty
for my 40th birthday party.
It said "I heart weed."
I still wear it when I want to get people talking.

I spent Christmas Eve -- pre-root canal, so in even more excruciating pain than post-root canal -- at Seattle Mom's annual Christmas Eve dinner party with a bag of frozen corn I'd fished out of Seattle Mom and Dad's freezer pressed to my face.  Seattle Mom looked at me, as the corn half-thawed on my face and I grimaced at her with red wine-stained teeth, and said, "Honey, that's your corn now." 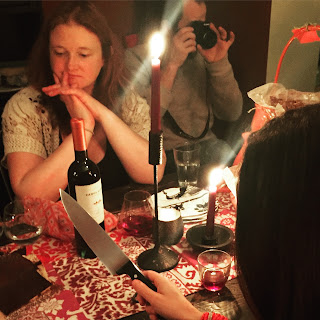 Our Christmas Day was speedy because we had a Mexico move to-do list staring us in the face.  We opened presents as quickly as possible then immediately began dismantling the Christmas tree and tearing down the festive holiday decorations decorating Banister Abbey. 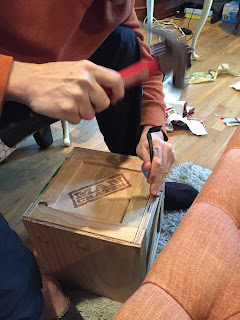 I got Alex a "Man Crate" for Christmas that he had to pry open with a crowbar.
He confirmed; it made him feel very manly.

Our Christmas tree was undecorated and lying by the side of the road by 8:00 a.m. on the 26th.  We must have looked like the worst of the worst Scrooges to the dog walkers who wandered by and saw our sad tree on the curb that morning, discarded nearly immediately after the event it was bred to celebrate.  All our decorations were already boxed and back in closets as well, and we had moved on to pulling our warm weather clothes from the closet and shoving them into boxes in preparation for our next life chapter.

There wasn't much relaxation in Seattle those last couple of weeks, just stress and angst and tooth pain and sad-yet-festive farewell parties and long hugged goodbyes with our dearests. Natani was the worst of the goodbyes for all of us, which was surprising since she makes us batshit crazy on a daily basis.  I guess it's because we know the rest of our people will continue their lives as usual and we'll be in regular contact with them as usual, but there's no question Natani will be posted at our front window daily with a dumbfounded alert kind of "where'd dey go and when dey back? Guys? Guys?" 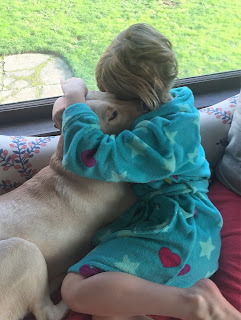 these two love each other more than anything
their goodbye was awful
we'll be back, sweet crazy dog girl.

We decided to come to Colorado for a week, where we are currently happy and snuggly (and fully recovered from root canals so once again narcotics-free) before making the bigger jump to Mexico City.  It made it more hectic on the Seattle end, the desire to spend a week with my family before leaving the country, but a transition period in beautiful blue sky Colorado was exactly what we needed -- 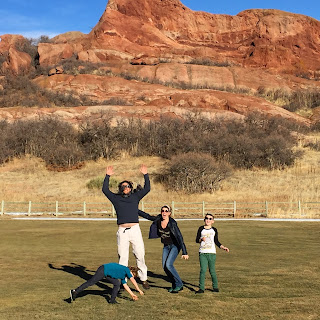 ....but it may be too late, minds may be lost for good

Being in Colorado is pure downtime after pure stress.  Now everything's been decided, whatever has been forgotten has been forgotten, our house and animals are in good hands with our superb house/petsitters, and we can say, "Meh, screw it" and go all limpy and soft in the warm Colorado sun while my mom makes my favorite lasagna. 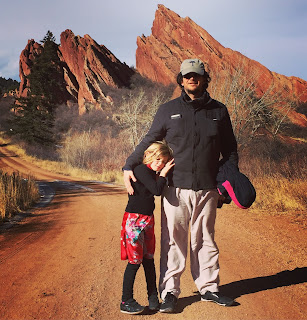 My favorite part of being in Colorado, aside from the beautiful scenery just outside the back door of my parents' house, is watching my mother take half an hour to compose an email.  Things always go wrong for her on computers so she inevitably ends up saying things like, "Well for pete's sake, now everything's suddenly gone bold and it looks like I'm yelling at Bonnie."

I lie in wait to observe moments like that.  They make her who she is, and she is perfect.

I love it here. But the clock is ticking, and our comfortable loving cocoons of both Seattle and Colorado are closing up for now.  It's time to make the next leap. 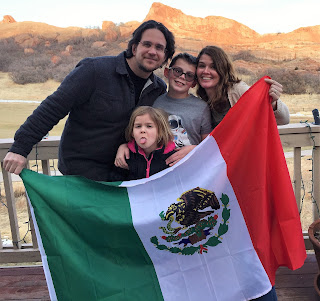 See you in Mexico City,
MJ


PS.  Before I go for real, a mini ode. Thanks for the daily laughs this week when I needed them badly, Mom and Dad.  You put the truly funny in my attempted funny, and have made me the happy oddball I am today.  You continue to inspire me with your senses of humor, love, mental fortitude, and unwavering cheerful support of all your children and grandchildren.

In the words of my Grandma J, "Well you're just a pleasure to have around...." 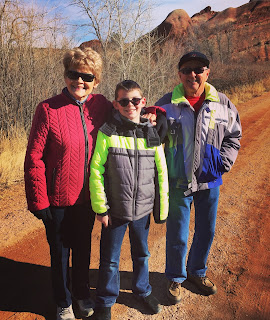 I will never look at a Dyson hand dryer
nor count sheep
ever the same again.
A week with them, with their desire to be constantly active, to move, their desire to love everything,
always changes you for the better.
Hasta luego....