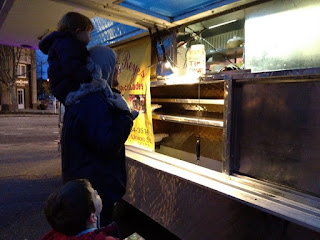 Here we are at the neighborhood taco bus.  Again.  We may scrap our "buy a house" plan and move into the taco bus instead.  We pretty much live there already, and are accustomed to living in small spaces, so it's actually a reasonable and delicious idea.

I went out for dinner Friday with my old friend, Cavanaugh.  If you read my Paris blog back in the day, you may remember him; he's the friend who visited me on his way to butler school in the Netherlands.   He's got mad butler skills if someone out there needs a butler. 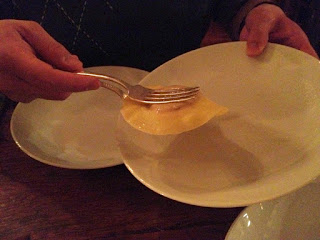 Here he's demonstrating his two-utensil one-handed serving technique.
Cavanaugh and I went to the much-acclaimed Italian joint, Spinasse, on Capitol Hill.  Spinasse has one of those menus that is short but dense; it uses language that makes it impossible to decipher what, exactly, it wants to feed you.  Cavanaugh and I dissected each item and said, "OK, I understand each of these words by themselves, but I no longer understand anything once they're placed next to each other."

Confusing, perhaps, but it did give me some ideas -- next time I have friends over for dinner, I'm going to serve pickled dandelion soap flan with wood sauce essence and Tibetan crumpleberry foam.

I didn't get a picture of the dinner menu.  Here's the dessert menu -- not as perplexing, perhaps, but some questions nonetheless.  "Carrie's torrone gelato terrine?"  Who the hell is Carrie and how do I know her hands are clean? 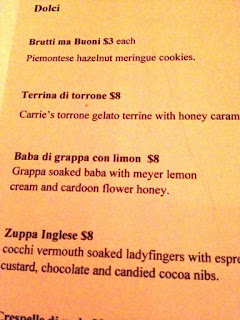 It was a leisurely hours-long meal full of the most incredible Italian foodstuffs -- things like cauliflower anchovy ravioli, Brussels sprouts, beet salad, and rabbit meatballs.   Now that I've just written those words, I realize all those things sound disgusting.  Believe me, they were not.

(We also had chicory salad with rabbit, leek ravioli, tajarin pasta with butter sage sauce, and a lot of wine.  Those sound better?)

I managed to refrain from using my patented "shove food in mouth using both hands, no utensils" technique and remained borderline socially acceptable throughout the meal.  I loved catching up with my old friend Cavanaugh but I secretly hoped he would go to the bathroom and get stuck there so I could eat his food.

Cavanaugh reminded me that back when we first became friends, we used to go to a specific Capitol Hill bar where I would drink orange beer.  It was a mandarin orange hefeweizen and I loved it so much, the bar always kept a few in the fridge just in case I showed up.  It was served in a pint glass with an orange slice.  Cavanaugh was so horrified by the whole thing at the time, it made him question our burgeoning friendship.

I'd completely forgotten about my former obsession with orange beer.  Aren't old friends valuable, to remind you how disgusting you used to be?

I went to see another old friend over the weekend.  I mentioned her before, guess I should call her Stock Trader Mom because I really have to start naming all these people with something identifiable.  Stock Trader Mom has a son similar to Lucien.  When we get together, our visits are full of half-finished conversations and lots of moving from room to room to escape the deafening noise that renders us unable to think.

I mentioned to Stock Trader Mom I was meeting Seattle Mom the next day for a "happy hour" at noon.  Stock Trader Mom raised an eyebrow and was like, "Noon?  Isn't that starting a little early?" but I assured her Seattle Mom and I had our reasons (we did, to be discussed in a later post).  About fifteen minutes later, Lucien let loose with an impressive amount of sound, frenetic activity, and wild-eyed facial expressions.  It left Stock Trader Mom speechless for a second.  When she recovered, she said, "No wonder you drink at noon."  Then she laughed so hard she cried all over the place.

Aren't old friends valuable, to remind you how much you should drink because your life is unbearable?

Speaking of old friends -- I haven't known her as long as these other two clowns but please, we all know Virginia Mom is an old friend.  Paris years are like dog years that way.

I haven't missed Paris nearly as much as I thought I would, but I sure have missed the people we left behind.  So when Virginia Mom sent me this picture last week of her wearing a bracelet we both own, and trying to buzz into our old apartment building, with the caption "YOU'RE NOT HERE!," I had my first ugly cry since coming home. 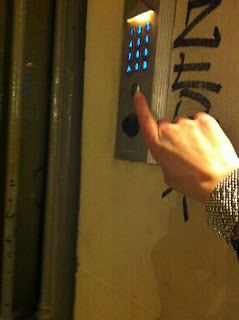 Damn you, Virginia Mom!
Virginia Mom was on our street because Virginia Dad is in a band now and they were playing a club seconds from our front door.  Virginia Mom said all French people in the club were sitting at tables and clapping politely between songs.  Her Anglo posse, however, was in the back dancing, singing along, and yelling.  I should have been there.  I miss those people, and miss sticking out like a sore thumb.  There was a lot of beauty in that.

Right back at ya, Virginia Mom Bracelet Twin... 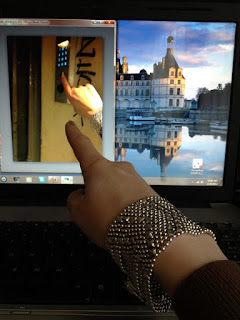 I'M  NOT THERE!
Lucien got off the school bus the other day and it was immediately obvious something was upsetting him.  He was looking at the ground, kicking at the dirt, wearing a bothered expression on his punky adorable little face.  I asked him what was wrong and he said, with the weight of the world on his shoulders, "A big boy on the school bus said I don't know anything about dinosaurs."

Way to kick my boy right where it hurts, mean older boy.  You are never going to be a valuable old friend to anybody if you keep it up.

This isn't what I was going to write about today.  Not at all.  In fact, I'm really confused how I ended up here.

Sometimes blogging is a surprising journey,
MJ
Posted by MJ at 9:14 PM