Taco heartbreak on the street of dreams

Wow, comment posse.  I asked, "Is anybody out there?" and you all stood up, waved your arms, and jumped up and down.  As a thank-you for being awesome,  here's a funny picture, courtesy of my Facebook friend, the spanking Santa -- 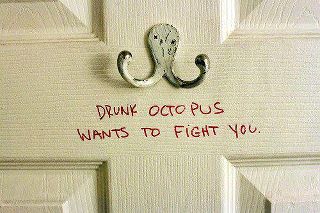 It's the best thing ever to come out of Facebook
We experienced a sad loss recently.  It's the taco bus.  The taco bus is not in its usual spot and has seemingly disappeared into the dark, lonely night.  The neighborhood is abuzz with rumors about why it went away, why it left us all alone.  The most popular rumor is the owners were being pressured by thugs for "protection money" and either got scared or sick of it and left.  I don't believe in negotiating with thug terrorists, but damn... I probably would have offered a few bucks to protect my tacos.

I'll never forget you, sweet little carne asada beauty with extra cilantro and spicy sauce.  I'm sorry the sh*tty people of the world made you leave.  They always ruin the good stuff for everybody else.

Lucien lost his self-manager badge almost immediately at school Monday.  He was not too upset about it because 1.) same-old same-old, and 2) he had a plan B -- when he got home he fetched paper and scissors and made a new self-manager badge.  His plan was to take it to school the next day and say, "What do you mean, I got my badge taken away, Ms. Teacher?  It's right here!  Can't you see it?" 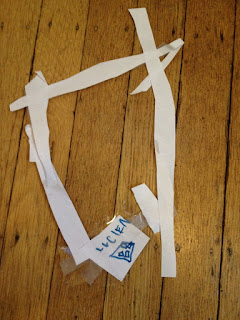 Good plan, Loosh.  No one will suspect a thing.  Now if you could just manage to get it over your head without ripping the paper...
Lucien has also taken to wearing his jacket backwards.  If it's raining, he puts his hood up, which covers his face, so he has to hold onto my arm for the walk home from the bus stop.  He trips a lot on account of not being able to see a damn thing, which sometimes makes us both fall down.  Coco's like, "You guys are freaks," and walks on ahead like she doesn't know the people on the ground. 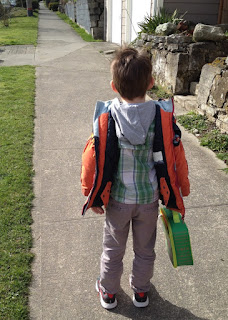 I cut Coco's hair.  I was going for Mia Farrow in Rosemary's Baby until Alex took the scissors away and said, "Stop that." I guess everyone can't be a fan of the pixie (or haircuts on their baby girls inspired by movies about devil spawn) -- 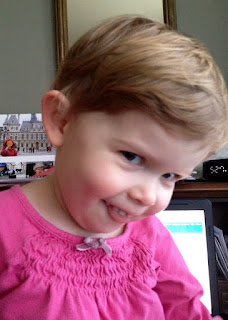 that's "the look" that tells us even though this one is quieter than the other one, we're still totally screwed.

I went out Tuesday night with Seattle Mom and two British guys from "The Street of Dreams" -- that's what Brit One called the street where they all live, which is also the street of The Goddamn House, so I'm going to adopt it as another stupid blog label.

We joined Brit One and Brit Two (neighbors from the Street of Dreams!) at their favorite bar for trivia night.  Our team didn't do so well.  I wish we knew more about Hard Drugs and Anatomy.

I took the following notes that night so I could remember stuff for the blog.  I'm sure these things were hilarious at the time but I'll be damned if I can remember the context for any of them.  Brit One said at one point, "My God, woman, you've got the attention span of a fruit fly," so that might be part of the problem.

Anyway, for what it's worth, these are my notes --  "The English gave us syphilis.   F*cking idiot from Yorkshire, it's always a pleasure.  Daft cow.  Throwing out toys with the pram.  He's got a strap-on."

Whatever the hell all that was about, sounds like a fun night to me!

I drove everyone home.  We were parked in a dark gravel parking lot and I didn't see the railroad tie parking space divider thing in front of the car, so tried to pull forward to leave.  I smacked right into that railroad tie thing, which compelled Brit Two to yell in his strong English accent, "Now MJ, ya don't want to be doing that, now do ya?"  Brit One yelled something like, "STOP GOING FORWARD" and Seattle Mom just kind of yelled in general.

Sheesh, you'd have thought we were the Titanic and I'd just struck the iceberg with the level of pandemonium in the car.  I was like, "People, chill, I got this, I know how to go backwards, too" but from that point on they didn't trust me and were horrible backseat drivers all the way home.  Next time I'm going to put them all in cabs. 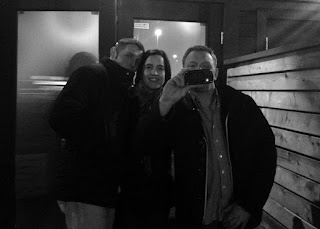 I'M the menace?  No, YOU'RE the menace!
Goodbye, awesome posse.  See you after the taco candlelight vigil,
MJ
Posted by MJ at 5:00 PM