I haven't written much about our search for a home because it's been a fruitless journey filled with dead ends, lost opportunities, and feelings of desperation and failure.  Several offers have been written, all of which have been laughed at and perhaps jumped upon by the seller.  Housing is crazy in Seattle right now;  inventory is low so competition is fierce and so far, we're losing.

Painful as the journey can be, I sure do love looking at houses.  I enjoy seeing how other people live and imagining how I could make their space mine once they get all their ugly sh*t out of it. 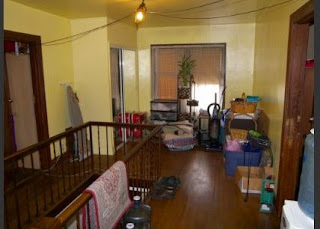 Sometimes it's hard to see past that aforementioned ugly sh*t, though.

Sometimes a house is so great it overwhelms you and you end up falling on the floor, humping it and yelling, "I WANT TO MAKE AN OFFER" in the middle of an Open House. (Alex swears he's not taking me to another Open House until I perfect something he calls a "poker face."  Sounds dumb, I don't even like cards.)

I felt giddy about this next one.  This was the big Victorian with mountain views for which we enthusiastically threw our hat into the ring.  Unfortunately, so did 29 other people.  And I hate them all, especially the guy who "won" the house by offering less than we did, but in cash. 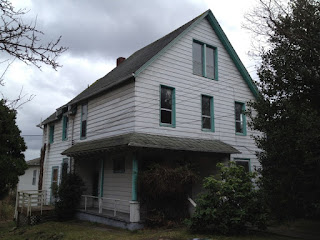 You have to love old fixers the way we do to see the perfection of this house.  If you don't love fixers, you're probably thinking I've inhaled a lot of dangerous fumes in my lifetime, which is the only explanation for loving that sad old thing.

Whatever you think about the house, losing it hurt me badly, so badly I wasn't sure I could love again. 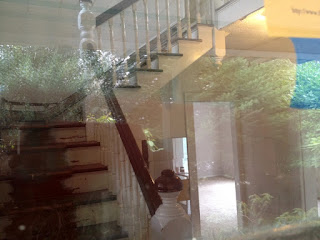 This one is an old Victorian, too, but it's already been renovated.  It's too bad they renovated it stupid, though, by consolidating the three bedrooms into two large bedrooms with a huge bathroom.  A two-bedroom house at that price?  Good luck, jerk. 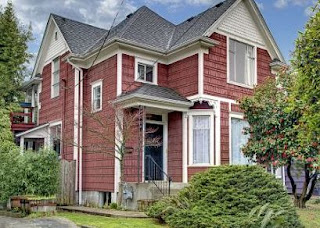 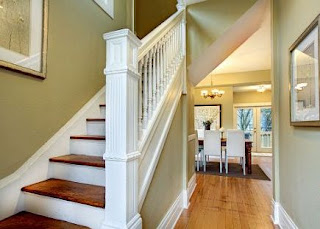 This next house had a pit bull locked in a kennel in the basement.  He stared at me through the chain link of his pen without moving a muscle.  He had dead eyes.  I no longer cared about checking the condition of the foundation;  I cared only about running away. 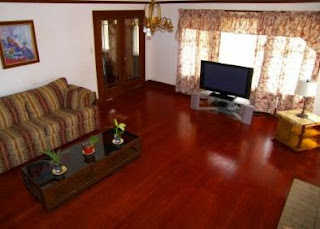 
I'm a sucker for a grand staircase.  This next house had one but was missing the banister.  Pretty convenient, I thought, because we were able to just take a flying leap at the stairs from the side and skip a large chunk of the "walking" nonsense. 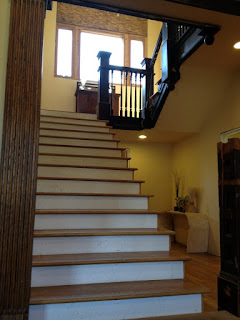 The banister-less house also had a large dog locked in a pen in the backyard, a German Shepherd, who was also quite intent on killing us.  Have you ever prayed for strength -- as in, the strength of a chainlink fence?  I sure have, twice now.

Some houses were modern -- 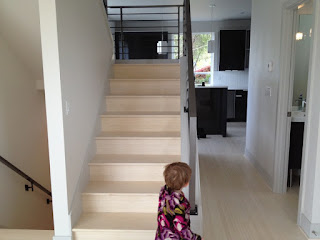 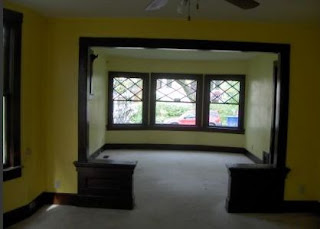 Some showcased the amazing abilities of the wide-angle lens.  When I walked into this next home, I realized this apparently spacious room shown on the website could actually be crossed in about four steps.  Photographic exaggerators!  -- 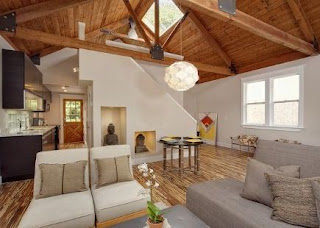 What a whirlwind it's been.  I've seen old houses, modern houses, big houses, small houses, expensive houses, cheap houses, beautifully restored houses, houses that need to be taken down to the studs.  I've seen it all. 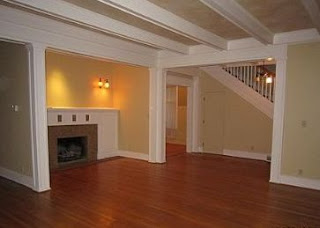 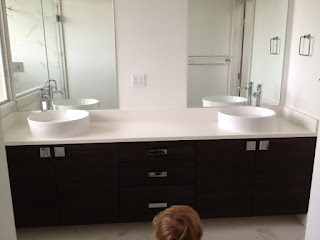 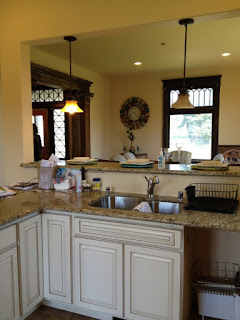 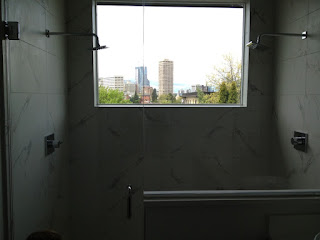 It's been a long road.  But now, I'm thrilled to say, we may be at the end of it.  We stopped by an Open House over the weekend on a whim, not really believing the house was what we were looking for.  On paper, it didn't check all our boxes -- and the boxes it left empty were very big boxes.

We made an offer.  The sellers countered.  We counter-countered last night at midnight and then didn't sleep worth a damn.  Now we're waiting.  Anyone else need a stiff drink and a Valium right about now?  If not, send yours over to me.

I don't want to get my hopes as high as they've been in the past only to have them dashed to smithereens again.  So I'm going to keep this one to myself for a minute, won't say too much about it.  I will say there are a couple photos of it in this post.  And I will also say that sometimes life is surprising.


Just when you're absolutely sure you know what you want, you can be totally wrong,
MJ
Posted by MJ at 5:51 PM

Email ThisBlogThis!Share to TwitterShare to FacebookShare to Pinterest
Labels: real estate can blow me