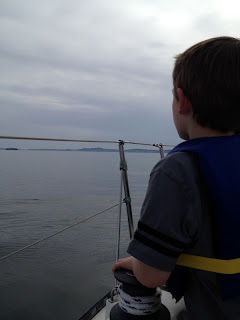 Coco's two dolls were recently in my arms when there was a knock at the door.  My two kids were in their room watching a movie on my laptop.  They were absolutely silent.  I was so happy.

I answered the door to a chipper youngish man, a neighbor, apparently, whom I'd never met before.  He said all the neighbors were getting together in a few minutes to work on the "beautification of the traffic circle," and would I like to join them?

The look that crossed his face was really something.  It was a mix of confusion and amazement with a touch of "ohhh sh*t."  I stared back at him with wrinkled brow.  Why was this jerk looking at me like I was crazy?  Did only insane people abstain from the traffic circle beautification process?

It was only after he scooted off the porch as fast as he could I realized I was holding Coco's two naked dolls in the crook of my arm.  I also realized I'd been doing the autopilot "mom sway" with the two dolls, rocking them back and forth AS IF THEY WERE REAL.  I was also, of course, holding a doll bottle because Coco insists on that, too.  "About to feed my two kids" indeed.

If I see that nice youngish man in the neighborhood again, I'm going to go outside with a rope tied around a bag of flour and tell him, "I'm just out walkin' the dog!"  I will also share my ideas for further beautification of the traffic circle -- fairy water with a pinch of snake dust. 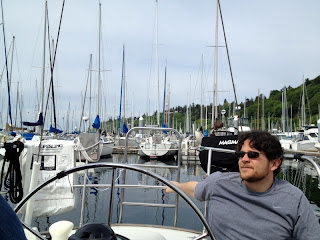 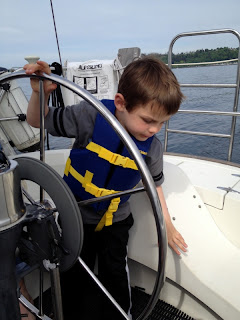 We went out on our friend "Uncle Alex"s boat over the weekend.  We learned it's hard to keep two kids occupied on a boat.  My advice to you if you plan on taking little kids out on a sailboat -- don't count on "sailboat excitement" to get you through the day because that wears off about ten minutes into your outing.  Then begins the chorus of "I'm bored" or, in the case of Coco, the senseless kicking of feet and throwing of objects.  You will end up handing them a full bag of potato chips apiece to keep them quiet so you can attempt to enjoy the sailboat yourself.

No matter what they do or say, you must not throw them overboard.  That part is very important. 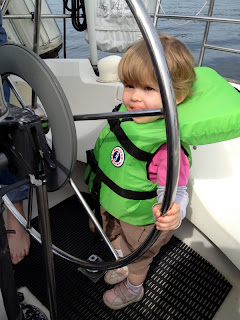 I'm prone to seasickness.  Quite.  But I still love boats.  It's a recurring theme in my life -- doing things that make me sick.  (See the "Cats with a hangover" post for further info.) 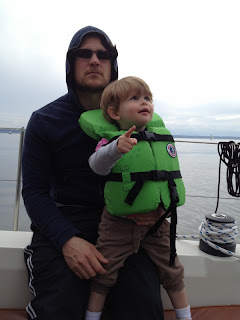 The Unabomber is making sinister plans but oh my gosh!  A seagull!


We're still in post-inspection negotiations with the sellers of Banister Abbey.  The sellers are real pieces of work.  Our realtor tells us we have a real knack for finding the worst sellers in the history of selling houses.  I don't think it was a compliment.

These people are going to give us heart attacks.  Or maybe nervous breakdowns.  At the very least a vicious case of hives.  We're not sure how it's all going to shake out but we're trying hard to keep our Banister Abbey dreams alive.

OK, off to feed those weird plastic kids that don't move,
MJ