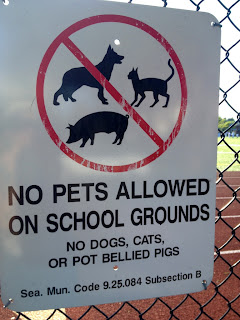 I saw the sign at left at Lucien's most recent track practice.

Is the City of Seattle being funny or are pot bellied pigs now a common animal to see about town?

If we're going to start banning odd pets from tracks, there are others I would consider before pigs. For example, it would upset me much more to see a pet boa constrictor at the track than a pig.  Also distressing would be tarantulas and/or tigers.

Inversely, there are pets I would like to encourage to come to the track.  For instance -- monkeys.  I would love to see a pet monkey at the track, preferably a Capuchin but I would also welcome a Pygmy Marmoset.

Seattle Mom invited me to her co-worker's wedding last week.  It was the first gay wedding I've attended since our state legalized gay marriage.  Washington, you make me proud to live in you.

Now that gay marriage is legal, conservative talking heads fret it's a slippery slope -- next it's going to be OK to marry animals!  Alex will be in trouble if that's true because I really like those Capuchin monkeys. 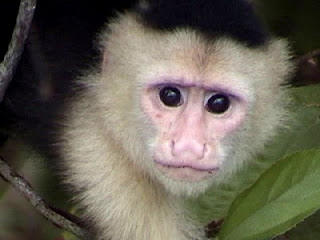 
The wedding was more frustrating and befuddling than most I've attended but it had nothing to do with the fact there were two brides and no grooms.  It had more to do with Car2Go, my heretofore beloved and flawless spontaneous transportation companion.

Seattle Mom and I drove a Car2Go to the wedding.  When we tried to end our trip outside the hall,  the car told us we couldn't end our trip because we were outside acceptable Car2Go boundaries.  That message was especially confusing because we were parked directly behind another Car2Go whose driver had apparently ended his/her trip quite successfully and walked away.

After some parking here and there with no success, I kicked Seattle Mom out of the car -- go see your friend get married, for Pete's sake! -- and continued to drive around and around searching for the elusive acceptable boundary.  I finally found it thanks to a squeaky-voiced Car2Go helpline representative who may or may not have been in the middle of a panic attack.

I ran many blocks in my high heels ("Wear the really high heels!" said Seattle Mom, "There won't be much walking!") but missed the ceremony anyway.  I hear it was beautiful and everybody cried.

At least I made the reception -- 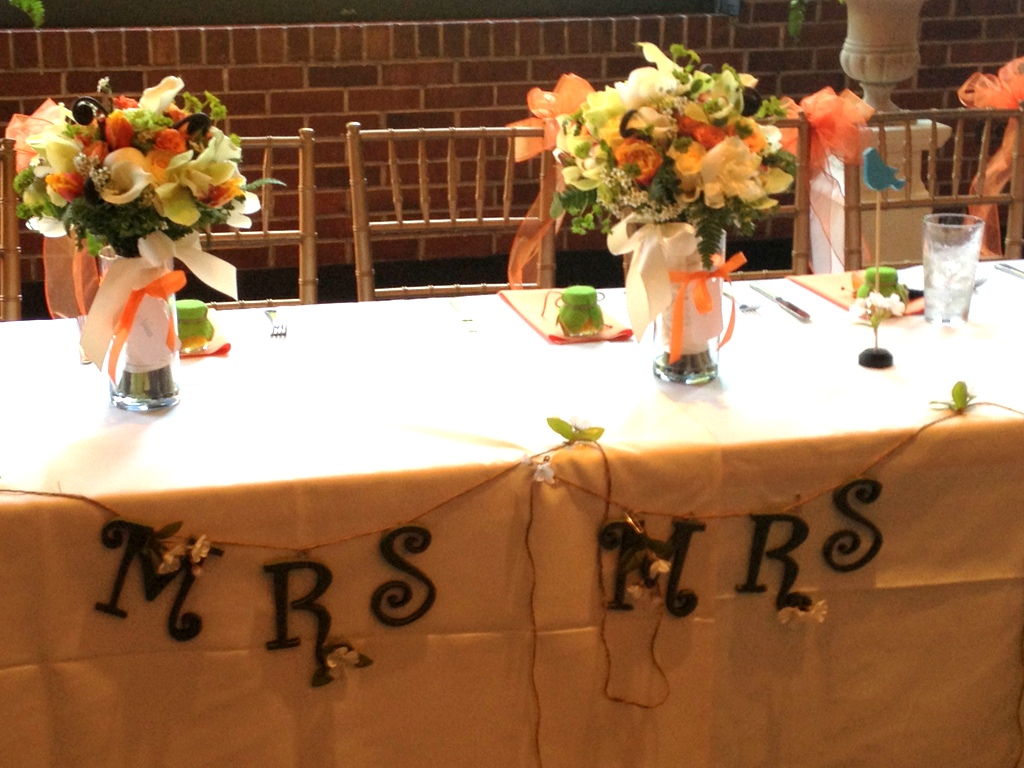 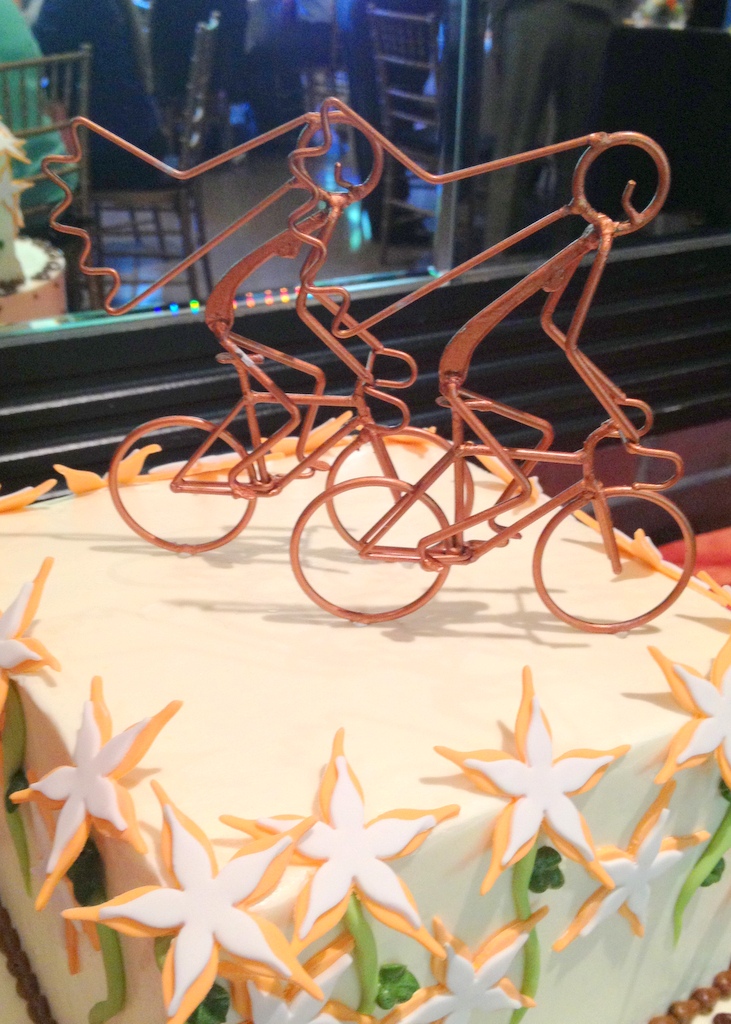 As I watched the brides smooth each others gowns and discuss how they shopped for them together, I felt a stab of envy.  How awesome it would have been to plan a wedding with someone who was as excited about "girl" things as I was.  Alex's eyes used to get glassy and a thin line of drool would escape his mouth whenever I talked wedding.  I would say things like, "I don't know whether to go sweetheart, square or strapless" and he would stare at me blankly and say "I have no idea what you're talking about."

Forget the monkey, I want to marry a woman now.  (those talking heads were right....this is how the gay people seduce us into joining their "lifestyle"...)

These brides have been together twenty years.  Even though I don't know them, it was a joy to see them make their commitment as legally binding and inescapable as me and Al's -- 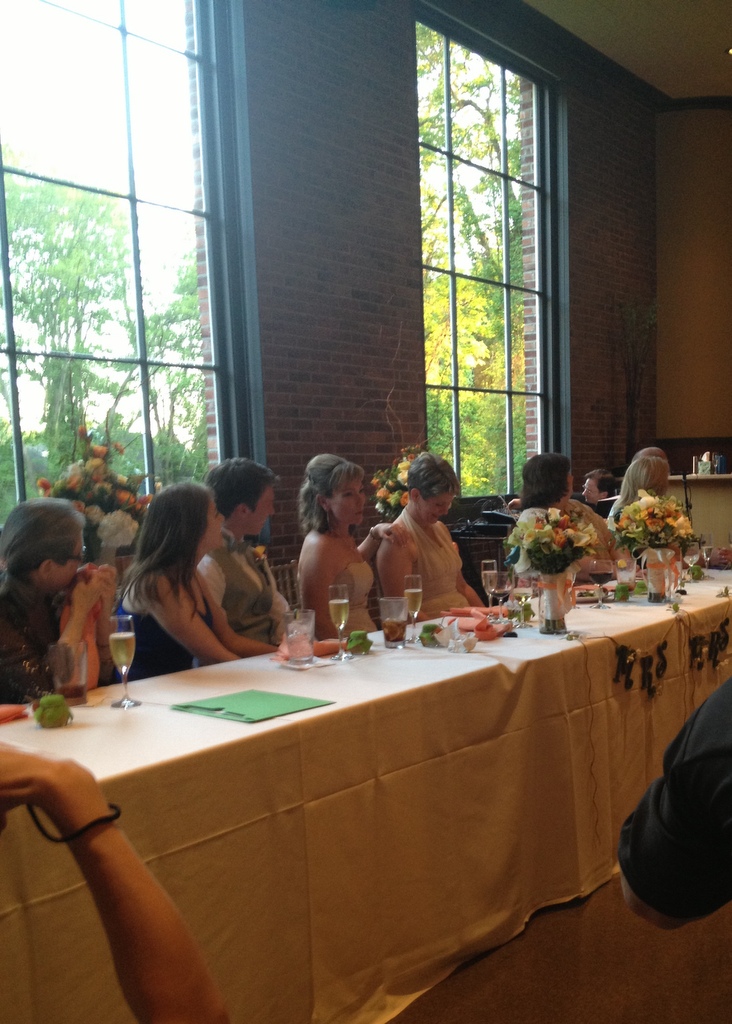 Best toast of the evening --
"You two are perfect love and I'm sorry it took the world so long to figure it out."

I chaperoned a first-grade field trip again because I'm a chaperoning fool.  Being the constant chaperone is my contribution at Lucien's school and honestly, I enjoy my time with those kids.

Except for this last time.  I was the only parent who volunteered between two classrooms so there were two teachers, me, and forty-two First-Graders.  I also had Coco.  It was an uncomfortable ratio of adults to troublemakers.

The idea was to take a nature walk at a nearby park.  The kids carried magnifying glasses and notepads and were tasked with observing and sketching the various trees, animal life and other naturelike things we came across.  It sounded great in theory but once you took into consideration the ledges-and-ravines topography of the park, the steep slopes on either side of the path at times, the lack of adults and the inexplicably stupid choice for my footwear (high wedge sandals, what?), it was a tense outing.

Our initial strict policing of the kids soon gave way to doing the bare minimum required for survival.  We settled for grabbing kids' hands last second to keep them from slipping into ravines and pulling them down from logs and out of shrubbery by their ankles instead of enforcing the unattainable "maintain a single file line at all times" ideal.

Similarly, the strict "use your half-voice" rule soon morphed into three frazzled adults yelling "I SAID USE YOUR HALF-VOICES YOU'RE GOING TO SCARE ALL THE NATURE" while the kids pulled each others hair and accused each other in their "screaming" voices of squashing the caterpillar (nobody squashed the caterpillar, the caterpillar was perfectly fine, I don't know why I was the only one who could see that.)

On our way back to school, I was posted at the end of the line to collect stragglers.  Half the students fell into this category so I was very busy.  I'm happy to report Lucien stuck cheerfully next to his teacher the entire time but I was kind of bummed about it -- he's the one I wanted to spend time with, not the permanently distracted girl whose collar I had to hold onto because she's always looking straight up at the sky.

I'm pretty sure I rounded them all up and got them back to school but it's entirely possible I left one stuck in a tree trunk somewhere.

I had a weird dream last night.  In it, I said to a group of friends, "Oh, so I have sex with one person dressed like a bunny rabbit and now you're calling me a Plushie?"  just as Alex's boss walked into the room.  I've never met Alex's boss, he's a real head honcho, but the "meeting" idea has recently been floated.

Is the meaning of the dream obvious, as in I'm worried about humiliating myself in front of a big kahuna (understandable, I can be an idiot) or is there something else happening in my strange subliminal mind?

(For the record, I'm not a Plushie)

(Unless there's a Capuchin costume?)

(If you want to share your strange dreams now, I wouldn't feel so vulnerable and strange)

I just spent hours putting together some before-and-afters of Banister Abbey and adding them to this post.  It made this post last for millions of years so I decided it was too much.  I'm going to put them up Thursday instead.  A reason to live!