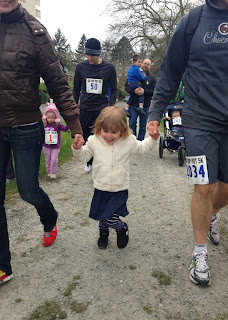 Being a track mom means I do the vast majority of my mom-ing at a track these days.  It means I've learned how to decently raise my kids in a set of bleachers. I know how far up the bleachers to sit to sustain minimal injuries (because my youngest will inevitably fall and roll all the way down to the bottom of the stairs) and I know which items at the snack bar have earned my "somewhat acceptable amount of sugar" track mom seal of approval.

If we're not at track practice these days, we're at a track meet.  If you're not familiar, track meets are where many teams come together and a zillion kids run every distance between 0 meters and 5,000,000,000 meters (in ten-meter increments) from right after school until the wee hours of the morning.

There is a 100% probability track meets will happen at schools that are very far from your home.  The map application on your smartphone is your new best friend.

I get a desperate sinking feeling when a large group of kids takes the field at a track meet.  "That many kids are running the 1500?  How many heats is that going to be?  WHY AREN'T WE ACTIVELY DISCOURAGING THESE KINDS OF DISTANCES?"  I told Lucien if he runs anything longer than the 200m his legs will probably break off.  He looked scared so that takes care of that. 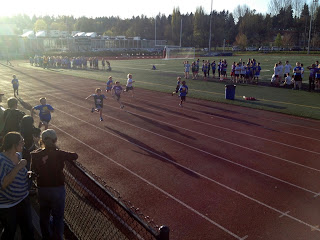 Lucien would be a fine runner if he would just listen to his coaches.  It's twice now they've told him to stop waving at his mom while running the 50m sprint.  It slows him down, as does his constant looking side-to-side (and over his shoulder) to see where all the other runners are.  Sometimes it also causes him to swerve into his fellow runners' lanes.  It's real exciting stuff.

He grins the whole time, though, so at least he's having a good time.  As with everything else in his life since the day he was born, he's doing it his own damn way with no need for input from others.

My un-coachable child is also fairly un-teachable.  His teacher told me when she called on him in class last week he said, "No thanks, I'm OK" and wandered over to look at a book on ants.  In his defense, ants are fascinating creatures that can lift fifty times their body weight.

In better news, his teacher says Lucien's "a popular, natural leader with huge ideas."  He also walked past me in the kitchen the other day and said out of nowhere, "Someday there's gonna be a statue of me in this town."  Putting those two things together, it's fairly obvious Lucien is one day going to be the leader of a cult.

I pass the time at Lucien's track meets by eavesdropping on conversations in the bleachers.  One happened in front of me between two highbrow women who didn't realize they were being funny.  It went like this --

"So she became a vegetarian because one time we stayed at a sheep farm in Australia and -- well, I think we just got a little too close to our protein.  After that she was a pescatarian -- that is, until my husband took her fishing and she couldn't handle what happened to the fish, just really freaked out right there in the boat.  So now she's vegan and honestly, she looks awful."

I hope the lady they're talking about doesn't uncover any uncomfortable truths about the bean or nut industries because she'd really be in trouble. 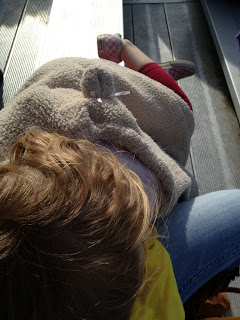 
I took the kids to a professional photography studio recently because we received a coupon in the mail.  It was a really good deal and I couldn't pass it up.

Our session was a little rough.  Lucien was so impossible to convince to look decent (and Coco will follow her brother's lead because she worships the boy), our sheet of proofs ended up looking like this -- 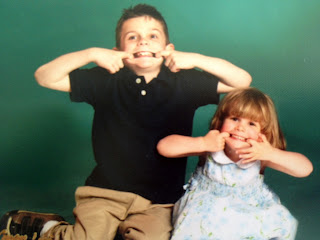 I still ordered a bunch because they do capture my children perfectly.

We aged our photographer by a few years.  They probably won't be mailing those coupons to people anymore. 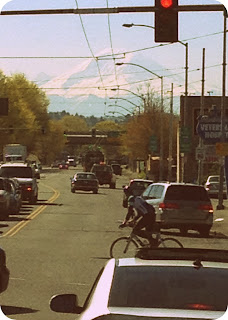 Mount Rainier on a sunny day never gets old.  Sometimes I turn a corner and see it on the horizon and it's so incredible I nearly drive off the road.  It may erupt someday and bury us all but until that moment, keep being awesome, Mt. Rainier.

Alex and Lucien and our good friend Uncle Alex ran another 5K last week.  This one was sponsored by Top Pot Doughnuts.  The sponsorship seems at odds with a healthy running lifestyle but it's actually a good motivator to get people moving.  Many people crossed the finish line in a big hurry with tongues hanging out and arms outstretched, desperately reaching for their finish line doughnut. 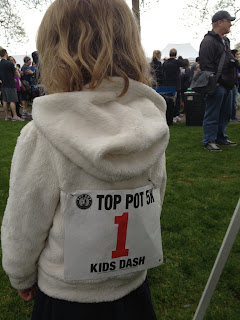 After the 5K there was a 1K Kid Dash.  Coco got nervous and wanted all of us to run it with her.  So I thought what the heck, even I'll run for a doughnut. 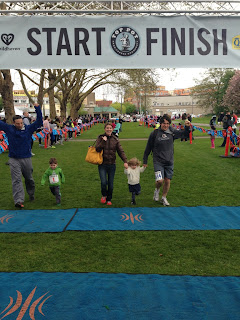 While carrying a large purse.  One never knows what one's going to need on a 1K. 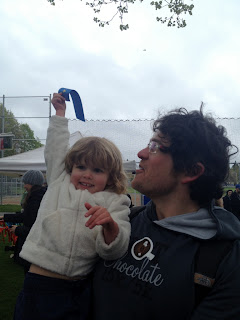 (I'm now going to propose a Bacon Dash in which participants get bacon shoveled into their mouths every few feet.  Between the Doughnut 5K and the Bacon Dash, I would become a dedicated runner in no time.)

We also recently had our school's fundraising auction.  The theme was "Hats Off" so we all had to wear hats.  I thought it would be more appropriate if we had our HATS OFF but I was overruled on that one. 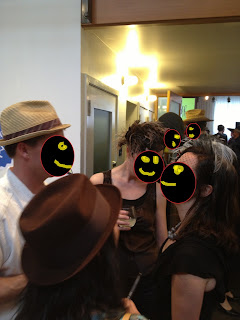 Seconds later, another auction-goer walked up beside us and asked Alex, "Hey, are you a wine guy?" to which Alex immediately replied, "Why yes I am."  He then walked away with the man who had a question about a wine at the end of the table.  I overheard Alex tell him it was a great year and a great deal and he should bid immediately.  I love my ridiculous bullsh*ttin' man.

A group of us only stayed for the silent auction part -- we cut out secretly and went down the street for an incredible tapas dinner at Tango.  The good people working at Tango probably wondered, "Why are all these yahoos wearing hats?" 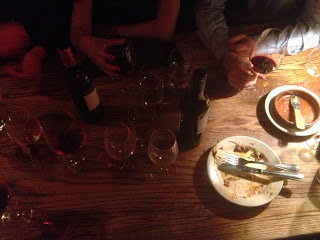 Parents of the Year all together now!

Slowly, I am building a new team of contractors.  I'm going to call one of our new arrivals "Contractor Smiley" because I've never met such a happy contractor.  The ones I've worked with in the past have been a little crabby (I'm lookin' at you there, Contractor God).

Contractor Smiley has a positive, can-do attitude.  For instance, we've been trying to find a door to fit our upstairs linen closet.  It's an odd size, narrow and short.  My perusal of the architectural salvage yards turned up nothing, which is never a good sign.

After begrudgingly deciding to have the door custom made, I mentioned a collection of old doors to Contractor Smiley, maybe ten or twelve deep, stacked in our garage.  They were left behind by the previous owner.  I'd never gone through them because what a mess.

Contractor Smiley said, "Oh my gosh, what are we waiting for?!" and for the next hour we heaved and grunted and hurt ourselves, moving and dusting off hundred-year-old doors covered in huge spiders, rat poop, and various grimes.  But there, at the very bottom of the pile, we found it -- an antique five-panel door of perfect size with original brass hardware still attached. 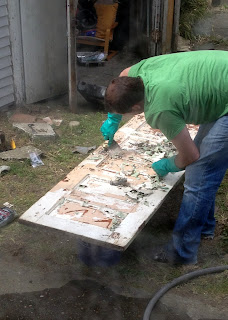 It's going to be incredible

We did the March of Dimes 5K March for Babies over the weekend.  My good friend's twins were born premature over a year ago. While they are both now healthy and perfect in every way, she and her husband have endured some really scary times.  They made it through thanks in part to the support of the March of Dimes. 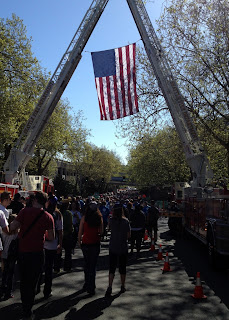 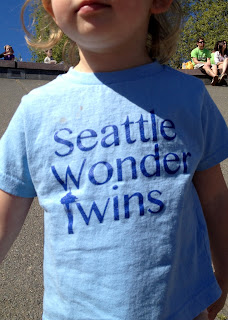 We walk for the Seattle Wonder Twins
(who had the stomach flu so slept through the entire walk and didn't notice our sweet team t-shirts.)

It was a perfect warm Seattle day, the kind that makes you happy with your dull, boring, repetitive track mom life. The kids got drenched in the Seattle Center fountain afterward and Alex and I permitted a small amount of sunlight to touch our ghost-white skin. 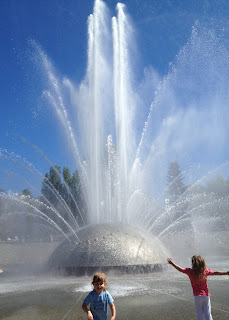 Someday there's gonna be a statue of me in this town,
MJ
Posted by MJ at 12:29 PM