There's a delicious tamale place across the street from our apartment. I have eaten more tamales in the past ten days than I have in my first 41 years of life combined. Our diets are so tamale heavy right now, I decided to be responsible about it and Google, "are tamales healthy?"

I'm going to keep what I read a secret and just keep eating tamales. They're not unhealthy if you ignore they're unhealthy.  Sshhhh.....I'm fine. 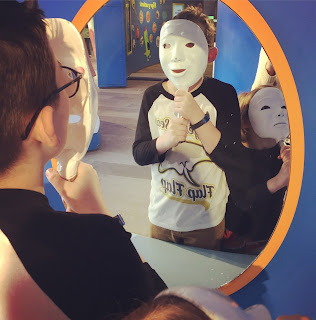 It got dramatic at the Papalote Childrens Museum

Speaking of knowing something you wish you didn't, now that I know how to use the doorman intercom phone thing on the wall, I wish I could go back to those first few days of staring at it blankly.  The doorman rings us occasionally for one thing or another and oftentimes Alex isn't home to answer. One day the doorman rang and I understood one word out of the entire torrent -- mañana. OK! Something was going to happen tomorrow.

I said, "Si, es bueno" and he sounded happy and said again "mañana?" and I said "Si!" because he seemed so pleased and tomorrow seemed a very good time for something to happen.  Then the doorman said two more words I understood -- "ocho" and "nueve," both followed with question marks and beats of silence. OK, I got this, he wants me to choose a time for the thing.

I chose "ocho" because why not.  Mañana at ocho seemed a good time for.... whatever.

When we hung up, I didn't know what I'd agreed to but was pretty sure we'd scheduled a time for our weekly housecleaning.  It had to be that. When Alex came home that night, I said fairly confidently I had scheduled the housecleaning service for 8:00 a.m. the next morning. He said, "OK, we'll stick around to meet them then go have breakfast somewhere."

Mañana at ocho came and went and nothing happened.  Nobody showed up, nobody called.  I shrugged at Alex, who shrugged back.  At 10:30, we gave up on waiting for whatever and went out for a very late breakfast.

We would have asked the doorman to clarify on our way out the door but it was the non-friendly doorman on duty and I like to walk past him as quickly as possible. We have two doormen -- smiley cheerful helpful Carlos (who had been the one to call me to schedule the whatever thing) and Señor Scowly, who rarely smiles, is never cheerful, takes his job very very seriously.

It's great to take your job seriously but Señor Scowly seems as suspicious of the people inside the building as the ones outside of it, which doesn't seem right for a doorman. We're not the enemy in here, Señor Scowly. 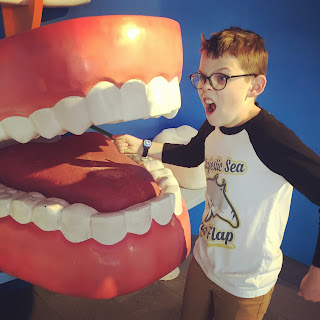 The Loosh puts the punk rock back into oral hygiene

Our apartment is a "temporary executive housing" kind of apartment and judging by what the kitchen is stocked with, it seems temporary executives don't like to cook.  It's stocked with a couple pots and pans, a half dozen spatulas and large spoons, and that's about it. There's no peeler, no can opener, no measuring cups or spoons, no large cooking pot, no baking dishes, you get the idea.

How am I going to make my craptastic homemade chili with no cooking tools? I very much regret my Vicodin-infused decision to fill the rest of our shipment container with Coco's stuffed animals back in Seattle. We should have filled it with our kitchen instead.

The not knowing where or how to buy anything is exhausting.  It takes the form of aimless wandering around the neighborhood paired with some fruitless shot-in-the-dark Google searches. Our grocery store turned up a can opener, so that was something, but we still don't have much else. 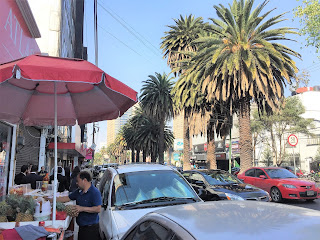 can anyone tell me where to get a cheese grater around here?

Ahh, the grocery store. For those who've been with me for the long haul since back in the Paris days (which Facebook recently reminded me began eight years ago) you'll remember the grocery store was a constant source of pain, embarrassment, frustration and anger for me. I won't rehash right now but let's just say more often than not, there was yelling.

I'm not going to have the same grocery experience in Mexico. Our neighborhood grocery store is a nice size, big enough aisles to move around comfortably.  Even when it becomes busy and congested, people wait, step to the side and let others pass as if it's no big deal. They all seem entirely too laid back for grocery shopping.

The kids went with me for our first grocery store trip and they wanted to buy a lot of fresh produce. "No way, kids," I said, "I'm not getting sucked into that produce trap." I remember all too vividly the Parisian weight-it tag-it yourself machine and the trouble it caused me. I refuse to head down that banana rabbit hole again.

I told Coco and The Loosh to stick with produce items that came prepackaged with little UPC stickers on the side, such as the nice gigantic bag of oranges. "But Mommy, we don't like oranges," they said. "I don't care," I said, "I know how to buy them."

On our second trip to the store, I pulled the cart to the side and whispered to the kids to watch what all the other people did.  Coco felt chatty in the middle of our produce reconnaissance so I hissed, "Shush, concentrate, this is serious, girl." Lucien soon reported, and I concurred, the other customers appeared to be just putting things in bags and putting the bags straight into their carts with no visible signs of stress. We then did a stakeout at the checkout line to make sure those bags were being handled gracefully at the finish line and nobody was getting yelled at.

I agreed to let the kids get two apples.  They wanted more but I said "let's not overdo it our first time" which made them look at me quizzically -- but I've been hurt before, many times, you see.

I gathered up our things with little trouble. The checkout lady was almost unnervingly smiley. I needed a validation stamp for my parking ticket and attempted to ask for it in Spanish but butchered the word for parking -- estacianimiento -- terribly. I tried again. The checkout lady stopped what she was doing to pronounce estacianimiento as slowly as she could.  I tried to mimic her, but nope, butchered again.

She pronounced it again, and again.  The lady behind me in line pronounced it, too.  They were smiling at me, and not even in a mocking kind of way.  I tried one more time, got it halfway right, and the woman behind the register laughed and said in English -- "Wee weel practous." I then pronounced "practice" for her correctly and we all had a good old laugh.

I don't know what the hell that was all about but I know I like it.

In other happy surprise news, the toilet paper I bought during our grocery shopping trip smells like baby powder.  I repeat, the stuff you wipe your butt with smells like sweet little babies around here. Alex has looked at me funny a couple times as I've walked past him pressing a roll of toilet paper to my nose but I don't care. If liking the smell of baby powder is a crime, please don't throw me into a Mexican prison, I'll stop.

I discovered another amazing thing looking out our apartment window at our view of the city; the very wealthy residents of Mexico City sometimes use helicopters to fly from one building to another to avoid the often gridlocked traffic below.

Most of the tall buildings we see from our apartment have helicopter pads. You can watch helicopters take off and land way off in the distance, or head out of sight towards the buildings of downtown. 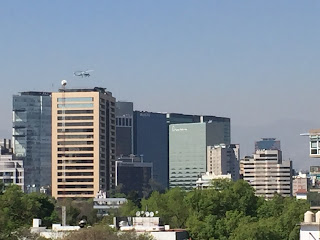 I have so much to write about, blog, I can barely keep it all straight and will likely forget most of it. I must discuss the kids' school, and an Ode to Leo is most certainly in the works. A guy just dropped down onto my balcony on a rope, wiped down the balcony furniture and disappeared again over the side, so I may try to puzzle that out later as well.

Never did figure out what was supposed to happen at ocho,
MJ
Posted by MJ at 10:33 AM

Email ThisBlogThis!Share to TwitterShare to FacebookShare to Pinterest
Labels: First days in Mexico, Señor Scowly, the doorman, the grocery experience