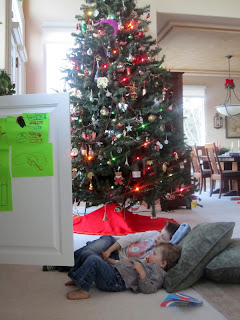 One great thing about living in temporary executive housing is you have housecleaning service.  The less-great part is you never know when the housecleaner is going to show up at your apartment and let herself in with her own key.  See where this is going?

Our housecleaner showed up while I was in the shower, Lucien was watching TV completely naked, and Coco was walking around in the nastiest diaper that's ever existed in the history of sh*tting.

I was peacefully shampooing when Lucien ran into the bathroom and announced, "Somebody's here, mommy!  Somebody came in the apartment!"  After a few hysterical "Somebody's here?  Somebody's HERE?" I wrapped myself in a towel, shampoo still on my head, and ran out of the bathroom armed with a toilet brush.  I planned to germ the intruder to death.

I scared the housecleaner more than she scared me.  After a few aggressive waves of the toilet brush, she got the message and promised to call next time.  Just in case she doesn't, the children will now be dressed in their Sunday best at all times and I will shower in my clothing.

We received our air shipment from France.  It was all clothes and toys.  I could have nixed the toys and packed more clothes because the kids only had eyes for the boxes.

The moving guys left without unpacking anything.  The head mover guy handed me a survey to fill out right in front of him that contained questions like, "Were your items unpacked to your satisfaction?" and "Were all boxes and other debris removed from your residence?"  I looked at the guy and said flatly, "You guys didn't do any of that" and he responded just as flatly, "Yeah, I know."  I circled a bunch of  "no"s and "not satisfied"s in front of his face and we moved on with our lives. 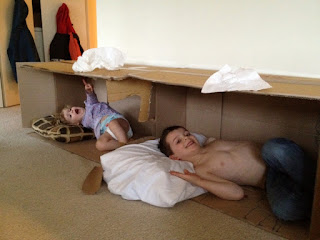 Box village.  These are their "houses."  They also both have "garages" and "offices."  A nice assortment of places to hide if we ever get caught unaware by the housecleaning service again.
Seattle used to feel like a big city.  Seattle no longer feels like a big city.  After living in central Paris, Seattle feels like a quaint village full of friendly little munchkin townfolk.  The drivers are so cute -- when I try to merge into another lane, they don't resist or try to push me off the road.  When I cross the street, nobody tries to run me over -- in fact, sometimes the drivers even stop and wave me across!  At first I gave those people the finger because I assumed it was a trap.

My sense of city has changed.  I bundled the kids up for a "long" walk to Pike Place Market and was perplexed when we arrived there in fifteen minutes.  I took a cab home from a night out with The Seattle Ladies and my jaw dropped when the fare was only seven bucks.  My recent ride to the airport was over before it began; I said to the driver, "We're already here?  My kids haven't even had a chance to get carsick and throw up all over the place yet!" 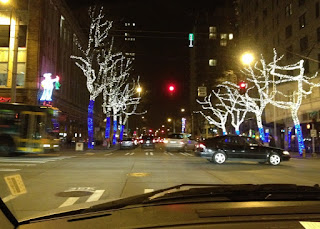 Seattle, you're so tiny I just want to dunk you in my coffee 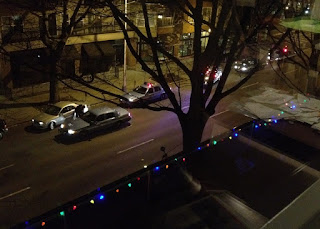 city seems a little sleepy when it takes five police cars to pull over one very drunk (or possibly just very bad at walking) driver.

We took that (brief) ride to the airport because the kids and I flew to Colorado yesterday.  I thought the solo trip with the kids would be a disaster and I would have material to fill one hundred blog posts.  I was wrong.  The entire thing, from start to finish, was flawless.  Everyone was helpful, kids were perfect.  I'm totally bummed about it, too. 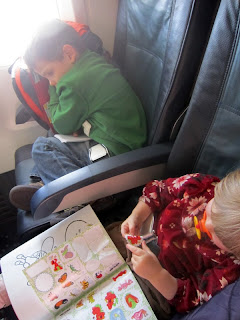 Thanks for nothing, guys
Now that I'm in Colorado with my family (Alex will be joining us closer to Christmas) all is right with the world.  The only bad thing I can say about Colorado is the air is so dry you get lots of electrical shocks.  It makes for a lonely life when you're always yelling at people to keep their hands to themselves because you're afraid of the pain.

Coco is obsessed with the Christmas tree and has made it her mission to destroy everything on it.  She is particularly aggressive with the Canadian Mountie ornament, which is upsetting since she's half Canadian. 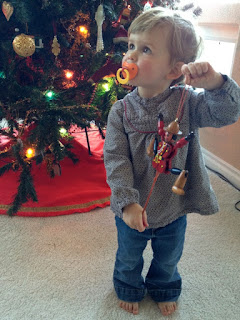 Last night my mom made wiener bean casserole.  The following words were actually uttered in this house when the dinner announcement was made -- "Yeah! Wiener bean!" 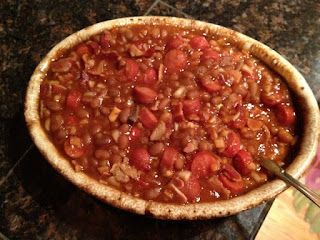