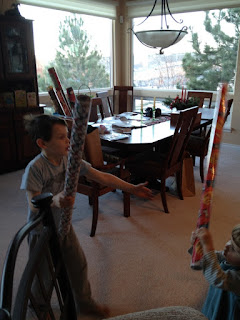 Here's a quote from my parents -- "Hey, what happened to all our Double Stuff Oreos?"

No, I'm kidding, that quote hasn't actually been said, but it will be soon because I have chocolate crumbs all over my face and those Oreos are gone, baby, gone.


Here are a few quotes that really have been uttered here in Colorado the past handful of days:


"Your sister came into the room, found your brother in a trance, and decided she didn't want anything to do with that."

"I never could get very excited about fingers.  I mean, I can appreciate what they do, but really, what's the big deal?"

"Your father was in charge of protecting Cleveland from intercontinental mussels."

It's not surprising another quote --  "What the hell are you talking about?" -- has been said a few dozen times since I've walked in the house, too. 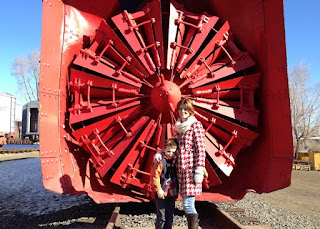 Coco has decided to leave the Christmas tree alone but is now going after the manger scene with a vengeance.  Today she grabbed a Wise Man and a shepherd and made them fight.  Then she took both of them for a walk in a stroller, so I guess they're cool now. 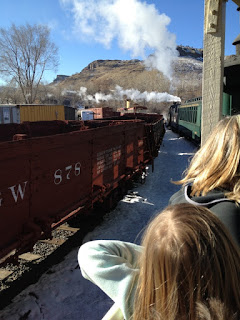 We've done lots of fun things.  And by "fun" I mean "we're only doing this crap for the kids."  A couple days ago we went to the Colorado Railroad Museum in Golden, Colorado.  It was a mob scene with a billion children and an overwhelmed Santa Claus and a large cartoonish dog engineer mascot walking around shaking hands (to arouse the plushies in the crowd, I guess).

We took a ride on a coal-burning choo-choo and were rewarded for helping destroy the environment with large amounts of soot in the face. Lucien gave me some attitude when I refused to buy him a toy in the gift shop and a lady who overheard suggested we take a piece of coal home for his stocking.  Now that's a use for coal I can really get behind, crushing the spirits of small children on Christmas morning.

The next day we went to Dinosaur Ridge in Morrison where we saw real dinosaur fossils and real dinosaur tracks. It was actually interesting so there's not much to write because I like to write about stuff that's terrible. 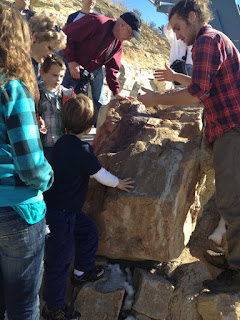 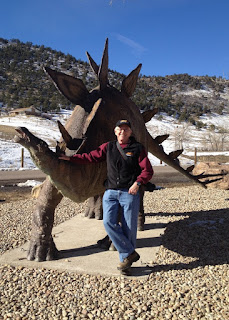 My Dad and a Stegosaurus 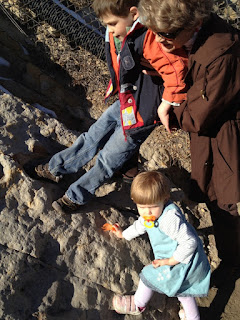 Lucien's foot in a real Iguanadon track -- an Iguanadon, people, OMG, AN IGUANADON!!!!

I'm on American fast food overdrive.  My nose is pressed against the car window as we drive around town and I've been known to yell, "Oh my God, is that a Sonic?"  Between the Oreos and the Sonic and the huge American grocery store filled with things I've missed, I'm right on track to be normal American-sized (= big, holy crap we are so big) by the New Year.

Speaking of American eating, my Mama just celebrated her birthday (love that Mama) and this is the size of the piece of birthday cake they served me -- 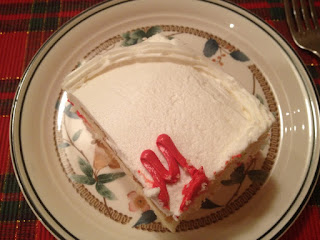 I thought it was comically large and started laughing.  They thought it was normal and asked, "Why are you laughing at the delicious cake?"  I was laughing because this piece of cake is roughly the size of the average Frenchman.

I had my hair colored by my mom's hair lady today.  She did a very good job and it was a great experience all around.  I noticed a few differences between the salons of Colorado and the salons of Paris, however.  There are more cowboy boots and vests here.  Also, more items of clothing containing the words "Biker Chick."  There is also a proliferation of bleached blonde hair on the womenfolk of the U.S. of A.  It doesn't look good, ladies.  Stick close to your natural shade.  I realize I don't have a lot of authority on the subject given my hair used to be orange, but please, listen to me.