Well here we all are in a different place 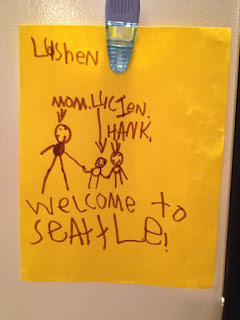 Well hello there.  I am the blogger formerly known as An American Mom in Paris.  I am now a blogger called Seattle Moxie.  I hope that clears up all the questions nobody had.

I'm back in Seattle, posse, and I'm confused as hell.  Not only am I lost in the city, but also, surprisingly, French is still my go-to language.  Greeting people in English feels unnatural so I've coined a new salutation -- "Bonj-ello!"

I also had a lengthy internal debate while riding in an elevator with a man about whether to say "hello" or "hi" to him.  I finally made my decision and yelled "HELLO" at the back of his head as he got off on the second floor.  He looked startled but gave me a cautious wave.  I've seen him a couple times since and he gives me lots of space. 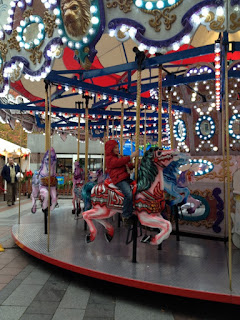 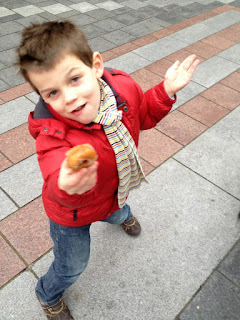 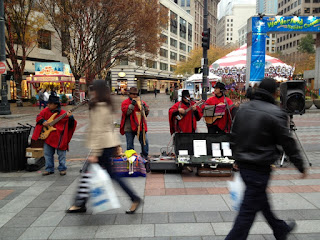 I love that these guys are still playing downtown
To say I'm striking up conversations with everybody is not an exaggeration.  I walked the kids down to Westlake Center Tuesday to ride the holiday carousel and visit Santa and eat bagfuls of mini-donuts from the mini-donut stand.  I talked to people on street corners while waiting for traffic lights, people in Starbucks, downtown bicycle cops and one nice lady who stopped me to tell me SHE LOVED MY COAT.  I made her talk to me for hours and she was like, "Jesus, I'm sorry I mentioned your stupid coat."

I bought my first Real Change newspaper and struck up a conversation with the homeless man selling them.  Good guy, good heart -- he has two kids you know, both in the military.

I didn't realize how starved I was for conversation with complete strangers.  There's something incredible about smiling at a stranger on the street, sharing a few pleasant words, wishing them a good day and being on your way.  It's not that it never happened in Paris because of course it did, especially if I had kids in tow.  The difference is now I don't walk away from the interaction hitting myself in the forehead, thinking, "I just conjugated that verb like an asshole." 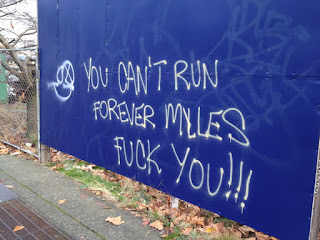 Miles, man, I don't know what to tell you.  Maybe try running forever.  Good news is they seem unsure how to spell your name. 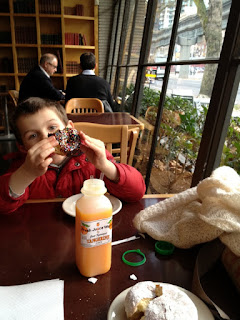 The kids and I went to Top Pot donuts a few days ago (we may not have croissants but Top Pot donuts are a fine consolation prize).  While standing at the counter, Coco tugged on the festive holiday garland on the display case and pulled it halfway off.  I apologized profusely to the smiley young man behind the counter.  He did not seem to mind; instead he leaned over the counter and said, "It's OK, I have to resist pulling on it all day long, too!"  Then with great flourish, he pulled the garland the rest of the way off.  Coco laughed.  Lucien laughed.  Everyone in line laughed.  What the hell?  Was he judging me?

I asked smiley young Top Pot man if he had any orange juice for the kids.  He looked stricken and said, "Oh gosh, ma'am, I'm so sorry but we only have tangerine juice.  I'm so, so sorry; is that OK?"  I just stared at him.  What kind of sick game was this freak playing?  I agreed tangerine juice was a fine substitution for orange juice and he looked relieved.  Jerk.

We haven't seen too many friends yet, thanks to the jetlag that's had us in bed every night by 8:00 p.m. and a miserable clingy sickness on the part of Coco, but those we have seen have confirmed what we always suspected -- our Seattle friends are batshit crazy.

We went to a two-year old's birthday party and our friend Santa showed up to hand out toys.  Lucien's head nearly exploded when Santa handed him a dinosaur.  Things took a strange turn, however, when Santa started bending adults over his knee and spanking them in an aggressive manner. 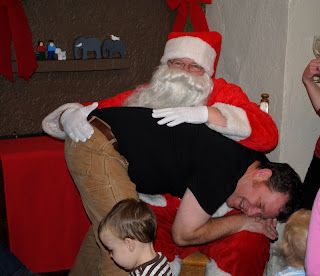 It's like they can't help themselves; they're parents and "role models" or whatever but still... still...  things get said and sound effects made.  It was probably inappropriate for a two-year old's birthday party, and likely more than one child is now terrified of "that creepy guy in red."

I've finally been inside the goddamn house.  It's a total mess.  I love it.  I have not yet met the supermodel who lives next door but saw him from a distance -- in his downtime, it appears the supermodel prefers to look like a homeless lumberjack.

I have so many things to say.  So, so many.  It's tough with both kids hanging around me all day, which will be the case until after the holidays, but I'm committed to the blog, more so than to anything else in my life which is probably not good?

Thanks again for making the jump with me from Paris to Seattle.  I hope I don't let you down, but if I do, I hope I do so fantastically,
MJ
Posted by MJ at 4:44 PM