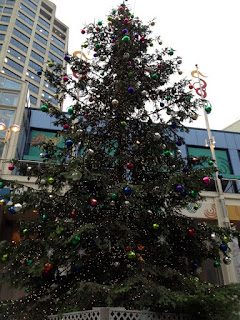 I am sick.  The American flu was so excited to see me again it wrapped its disgusting arms around me and won't let go.  It's always awkward when one person in a hug doesn't want to be in the hug.  I am desperately trying to extricate myself but I don't want to hurt flu's feelings; it apparently likes me very much and has been anxiously awaiting my return.

1.  Gallon milk jugs are stupid and unwieldy.  It's difficult to keep the milk under control so there is more milk on my countertops than on my Fruity Pebbles.

2.  It is dumb that all U.S. cash is the same color.  I used to glance at my cash and know exactly what I had in colorful euros.  Now it's like, "ARGH, green stuff, I give up on life."

3.  Toddlers and Tiaras is THE REASON WE CAN'T HAVE NICE THINGS, AMERICA.

But in good news, I've seen a man wearing a skirt and a man with bright pink hair wearing a dog collar.  I'm not sure why that's good news, but it is. 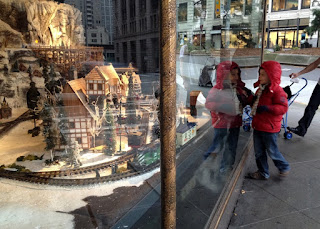 suck it, Printemps; Macys has a choo-choo
I've been stopped several times about the coat.  The coat is a real Seattle crowd-pleaser.  The problem is, if someone asks where I bought the coat, it's impossible to say "I bought it in Paris" without sounding like an insufferable snot.  I have since switched to the more vague, "Gosh.... I don't remember...boop boop boop... hey, where am I?" Better.

I wanted to make our three-year reunion extra special.  I stood to the side of the front door and when the door opened I jumped out and yelled, "I'm back, bitches!"

A cute little white-haired man stared back at me.  I didn't notice him for a second because when I jumped at the door, I spilled the glass of red wine I was holding all over my white mittens.  I hopped around, shook wine off my mittens, and used the "s" word liberally.  When I looked up and saw the nice white-haired man looking at me with wide eyes, I got flustered and said the first thing that came to mind -- "I just lived in France for three years!"

Man, I really made that guy nervous.  He spoke softly but I managed to piece together he was babysitting while Second Seattle Mom was out with her husband (named Second Seattle Dad?  Jesus, how am I going to name these people, it doesn't make any sense at all).  I asked him to tell Second Seattle Mom and Dad I stopped by, then apologized a few times for "being weird or whatever" and ran back across the street with my wine glass and my stained mittens.

I checked in with Second Seattle Mom the next day and she said, "Dad said you stopped by!"  He apparently didn't give her any details or voice any concerns so maybe he's willing to give me another chance.  He probably understands France can really mess with a person's brain.

Here are some fun things I did with the kids last week before it all went to hell on the health front: 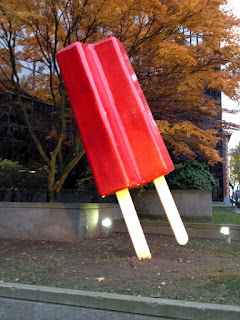 stunning use of popsicle proportion
Went to the Pacific Science Center -- 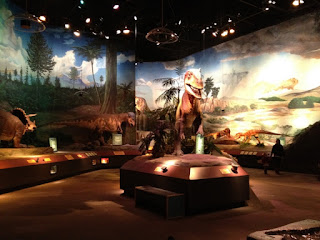 because I can't get enough animatronic dinos 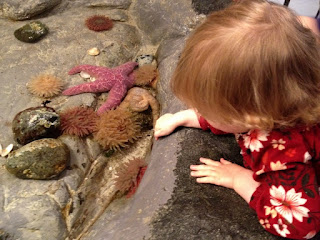 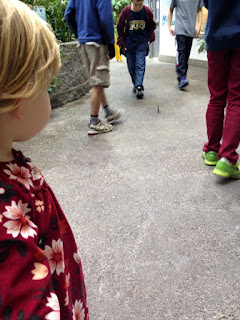 she had her eye on that damn uppity butterfly in the butterfly pavilion, too 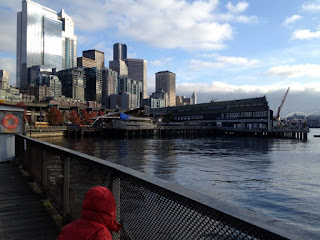 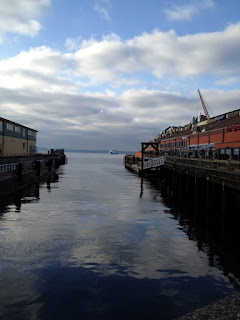 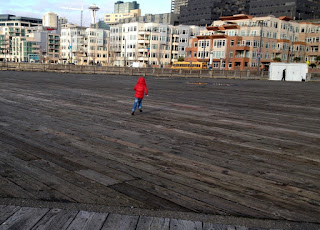 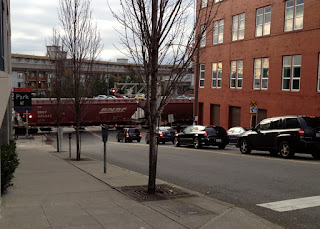 I forgot about this part
Except for the flu, I'm still riding the high of being home.  Virginia Mom has moved many times in her life.  She told me going home was going to be a bit like having a newborn baby.  At first it's exciting and new and crazy and everyone is fawning all over you but after a month or two everything quiets down and you're left thinking, "Oh great, now what the hell am I gonna do with this newborn baby?"

I think what she's telling me is crushing depression, loneliness and disappointment is going to set in any time now.  I will prepare myself, and comfort myself with the fact I don't have a real newborn baby.