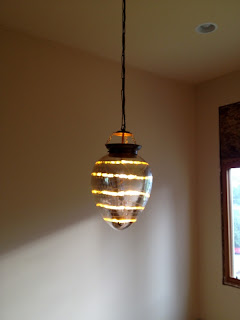 Thanks for all your well wishes on The Prodigal Schnauzer's return.  He fit back into the family without much trouble at all.  The only problem is he has pancreas issues so eating human food is akin to eating poison.  Oscar doesn't care about that, though, so spends his days relentlessly foraging for things that can kill him.

There are workmen all over my house.  Some days there are only two or three, some days upwards of ten.  I have no idea what most of them are doing but I like having them around because they're real characters.  I especially like coming home to find them gathered around the dining room table eating a bucket of fried chicken for lunch.  They yell, "Hey, MJ!" and I yell back, "SHH, JUST GIMME CHICKEN."

The first time Alex and I did a "fixer" house, we did it ourselves with the help of several loyal but masochistic friends.  It became our lives, took every spare second we had and every single weekend.  Oh, the caffeine consumed!  The NPR listened to!

But this time around we've discovered something called "general contractors."  These magical beasts come into your home, do all your work, and in return just take all your money.  It's easy!

Our contractor, Contractor God, is the best.  He's also a good friend of Seattle Mom and Dad and lives on the Street of Dreams right near The Goddamn House next to Supermodel Neighbor.  Check out all those blog monikers in one sentence, truly boggles the mind. 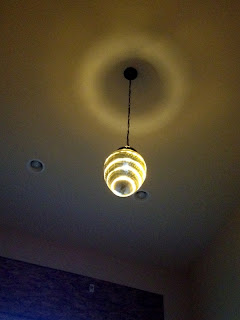 I didn't think it was possible, but it got even worse at night

Lucien spent his first week of summer break at a sports day camp.  A father of a fellow camper was inexplicably always barefoot -- and when I say always, I mean always.  He was barefoot when he stepped out of his car, barefoot walking across the parking lot and up the hill, barefoot in the bleachers, barefoot in the john, barefoot all the time. 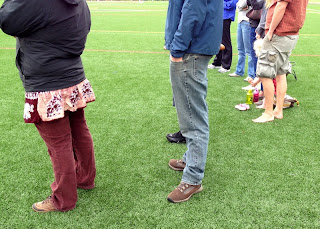 see if you can spot him

I spent Sunday at our old house on Beacon Hill.  Our renters moved out so I have to get the house ready for new renters.  I also had to do a ton of laundry, which I lugged to the rental house in many suitcases, because we're still awaiting our washer and dryer at Banister Abbey.  We hear they're somewhere between Seattle and Brooklyn.

I stopped at our old neighbors' house for a visit.  They're fantastic -- so fantastic, they gave me a cocktail at noon.  At first it helped with my laborious tasks at the house but then it made me sleepy.

My feelings are still very hard to manage at the old house.  It's a house full of memories, a house we worked hard to fix, a house we always imagined living in after our years in France.  We changed the plan without ever returning, so there's still unfinished emotional business on Beacon Hill.

When I'm there, I see baby Lucien crawling across the floor and learning to walk in the kitchen.  I hear the sounds of our old parties, full of great friends, some of whom we've completely lost touch with. 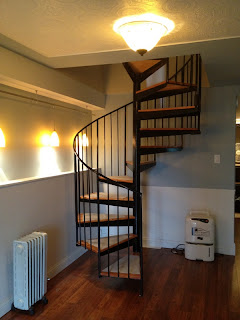 I also remember Lucien's first birthday party when Alex got so sick, he became dehydrated and collapsed.  I called 911 right as the first guests walked in carrying balloons and presents. 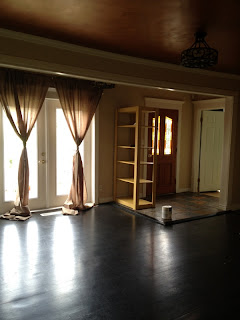 I also remember the false alarm thanks to a faulty ADT smoke detector that brought the fire department to our door, charging up our steep front hill fully clothed in their gear and carrying axes.  Lucien ran around our deck in just a diaper and squealed at the sight of them, in the full throes of little boy firemen heaven.

The firemen were not so rapturous when we shrugged and told them nothing was wrong.  They looked pretty pissed, in fact. 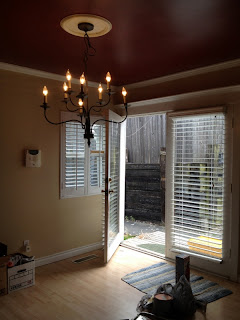 I painted an apple tree in Lucien's room when he was a baby.  It stood over his crib, wooden letters spelled out his name in the apples.  I ran out of time to paint over it before we left for France so left the paint for the renters.  They never painted over it, either, claiming they "just got used to the thing."

I rocked a colicky Lucien under that apple tree for months.  That kid cried/screamed/acted possessed by a demon all the time.  At one point Alex looked at me with bleary eyes and said, "What if it isn't colic?  What if he's just telling us who he is?"  I think we all know how that turned out.

It still hurt to paint over that tree. 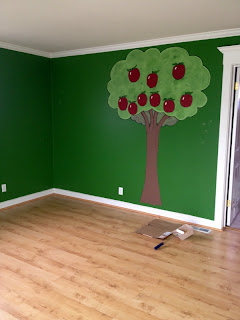 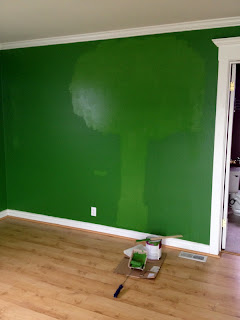 I was tired when I left the Beacon Hill house.  Alex then told me we had reservations, just the two of us, for a belated anniversary dinner.  He said I had to be ready in five minutes because the babysitter was on her way.  And that's how I came to be at La Spiga, unshowered, my hair back in an old headband, with green paint up my arm. 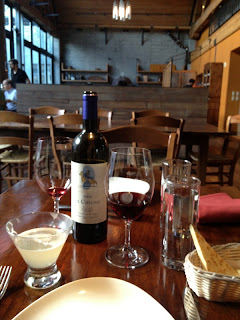