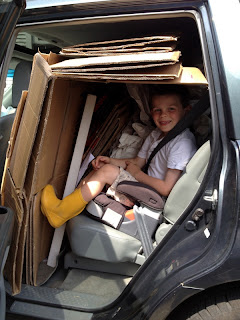 Alex and Lucien were supposed to leave for their boys-only trip to Quebec Saturday morning.  But they didn't.  Because Friday night, as I packed Lucien's suitcase, I realized Lucien's passport expired six weeks ago.

Seattle Mom and Dad were coming over for dinner and arrived right after the passport realization was made.  Because they are good friends, they sprang into action.  Seattle Dad put the Loosh into his car and took him for a new passport photo.  Seattle Mom prepared the food I was supposed to prepare, freeing Al to freak the eff out and me to punch myself repeatedly in the face in the corner.  We are thankful for our level-headed friends.

What followed was a strange, disjointed night that involved hearing of a friend in hospice and an argument with Contractor God about strippers.  The night was made even more strange when I walked outside to check on the kids and saw two people standing on the sidewalk who asked, "Hey, is that your rabbit?"

I'd never been asked that question before so I had to think a minute before I answered, "Umm...what?"  The couple then pointed to a gray flop-eared bunny sitting in the middle of my yard.  The couple said they'd been following it for six blocks, trying to keep it out of the street, of which it seemed quite fond.

I had a rabbit when I was a kid so I know how to catch the springy little things.  The couple corralled the darting rabbit best they could and I pounced, throwing myself on top of the rabbit as it ran down the sidewalk and grabbing it by the scruff of the neck.  The little sucker didn't like that and attempted to scratch my body to pieces but I hung on, I hung on!

Thankfully, another neighbor knew the rabbit's owner.  Soon thereafter the bunny went bye-bye in a cage.  I hope he comes to our next get-together because that rabbit really knew how to party.

We went to the airport the next day to see if we could salvage the boys' Quebec trip.  We debated calling the airline versus going to talk to an agent at the airport.  We decided even though both options were generally useless, we preferred to hate someone in person.

How did airports go from the relatively sane places I remember from my childhood to the absolute pits of hopelessness and despair they are today?  We had to wait in the "people with problems" line which is truly a study in dead-eyed human misery.

We waited for an hour.  Then two.  At one point, the only agent appointed to the "people with problems" line disappeared.  When the angry customer she'd been helping demanded to know where she was, he was told the agent was on her break.

That wasn't a smart thing to tell people standing in a "people with problems" line.  All hell broke loose with a lot of yelling and waving of arms.  People with problems in airports are seriously stressed out people.

An agent finally rebooked the boys for Tuesday and gave us the documentation needed to get an emergency passport on Monday.  Surprisingly, the emergency passport procedure was easy and went off without a hitch, so the boys are finally, happily, in Quebec having a great time.

I'm used to Alex going out of town, happens regularly.  I am not, however, used to seeing my little boy walk away from me dragging his little wheelie suitcase behind him.  I was not prepared for the huge lump in my throat and the hysterical waving and yelling, "BYE LUCIEN BYE LUCIEN BYE BYE." 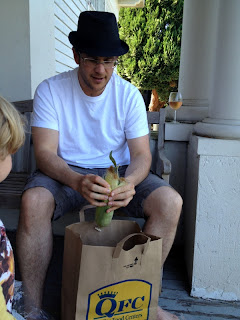 I talk to Widower Peter nearly every day.  He has a lot to say so it's a real investment of my time when I choose to join him at the gate.  The other day he wanted to talk about "relationships these days."  He's fed up hearing about all these "men who spend their time in bars" and "women who run off to the Bingo parlor on Saturday nights."

Speaking of Saturday nights, here was mine -- 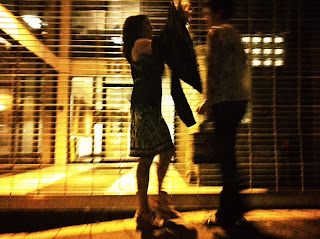 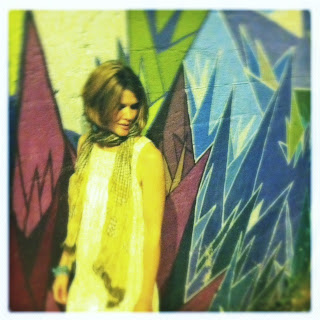 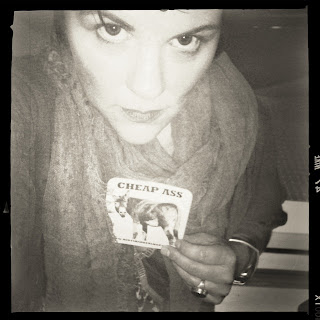 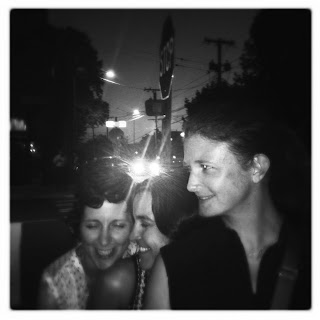 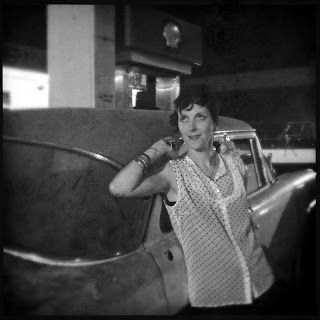 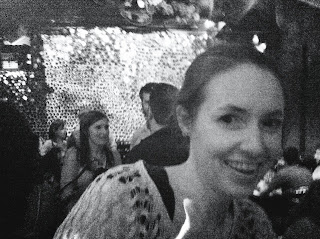 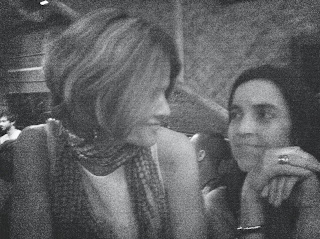 photos by the fabulous Christina Mallet

No Bingo in sight.  Gosh, don't tell our fellas.

And Seattle Mom only pretended to do that shot -- she actually dumped it on my foot under the table.  Busted.