Welcome to The Exciting World of Grout Color.  This episode is entitled, "Sh*t, I just wasted hours of my life debating between "bone" and "linen." 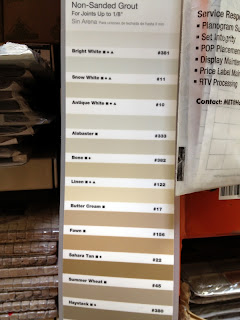 It's hard to articulate what days are currently like over here.  There are people.  Everywhere.  Two days ago there were eighteen men climbing all over the house.  That sounds hot and sexy but in reality it was confusing, loud, and dusty.

Our fence started going up that day plus we ripped out a bathroom plus we got new gutters.  There were swarms of men crossing the yard, many with ladders.  Sometimes the guys would get confused in the middle of the man soup, forget what job they were doing, and wander off to do another job.  That's how we discovered gutter guys suck at fences.

On top of all that, I hired piano movers to move the piano from our old house.  When the piano movers arrived at Banister Abbey with the piano, there was nowhere to park within a two-block radius on account of all the trucks belonging to men at our house.

The piano movers said, "Errr.. we have a piano?  Move a truck, dammit?  Please?"  Someone did, of course, because we do not employ assholes. 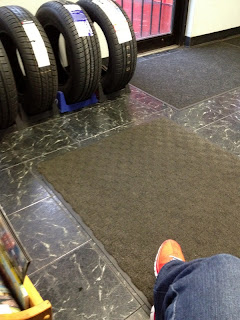 Here's a side effect of having workmen all over your yard -- spending time in a tire repair shop thanks to that nail dropped on your driveway.

Yesterday I was standing ankle-deep in plaster dust and discussing some issues with three workmen when a bright-eyed young man with a passion for liberal politics came up the path and stood on my front porch.  He was raising money for his organization to change the something something something something because we can't be havin' that anymore!

I knew out of the corner of my ear I agreed with his cause but I was distracted because of the electric saw sounds and the men talking to me and the two children tugging on my skirt, one of whom was also sitting on my foot and yelling "HORSIE."  The only thing holding up my skirt was a weak piece of elastic and the children were testing it mightily.  I hung onto my clothing in the desperate hope I would not be de-skirted in front of the three workmen and the young man with a passion for liberal politics.

(Actually, the workmen and I have been through so much together by now, including sharing the only working toilet in the house, all day, for weeks now, it probably wouldn't phase them too much.)

The political man attempted to give me his schpeel but I kept interrupting him to yell at someone, usually a child but the workmen get uppity from time to time, too.  The young man gave up trying to talk to me and stood silently, waiting for me to make the next move.

I apologized for being inattentive to his pressing political matter.  He nodded, then said the only non-political thing he could think of;  he said, "I think she has a poo-poo" and pointed at Coco.  I turned to look; Coco was inexplicably no longer wearing any clothes, just a diaper.  Hey, when the hell did that happen?

Her diaper was droopy so I can understand the young man's confusion but there's no way it was a poo-poo because we all would have known it without doubt, believe me.  So I said, "No, it's actually not a poo-poo, her diaper's just full of pee and needs to be changed." It occurred to me this was a strange thing to say to a stranger on my front porch but that's just where we were led in the moment.

Coco, upon overhearing my explanation, did what any dutiful daughter who needs her diaper changed would do -- she ripped it off, threw it on the floor, and ran past the political man out into the front yard.  I chased her naked self outside for a full five minutes while she ducked and weaved and screamed, "MOMMY CATCH ME!"

I tackled and dragged her indoors.  On my way past, I told the nice young man I would like to hear what he had to say but now was not the best time and could he come back later?  He agreed to return in a couple hours when things were sure to be more calm.  Except they weren't.  A couple hours later when he was once again on the front porch, both children were naked and attempting to sled down the front stairs.  I'm not even kidding.

I just made a donation to his cause and let him escape.  We were both relieved it was over.

I'm stuck in a very unhappy blog place.  There are insane things happening daily but I lack the time, the peace, and the energy to write them all down.  I hate this, hate it a lot.  Here are a few pictures and I'll have to call it good. 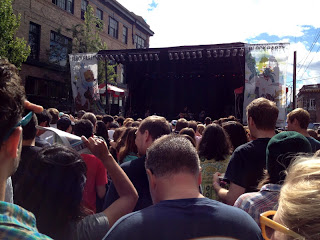 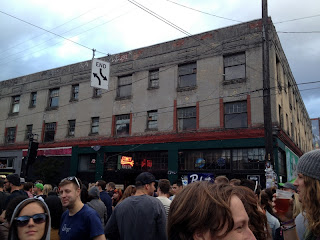 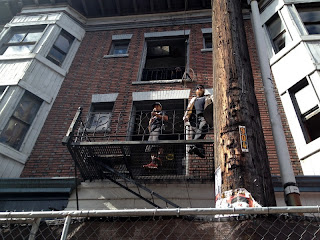 Seattle Mom and I went to the Capitol Hill Block Party over the weekend where we saw The Lumineers, Phantogram, and Neko Case.  During the Lumineers performance, a large white man with dreadlocks who reeked of The Happy Weed pushed through the crowd and stood two inches in front of Seattle Mom's face.  When she tried to move over, she was accidentally smacked in the face by White Dred's girlfriend who didn't know how to keep her hands to herself when she danced.

When the crowd is that packed in -- JUST DON'T DANCE, PEOPLE.  Stand with your arms crossed and bounce up and down a little like all us normal people. 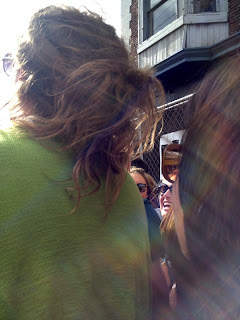 That's Seattle Mom's face staring at White Dred's back.  Seconds before she'd been staring at the gorgeousness of The Lumineers.  Life is unkind.

Two of my friends broke into the house for sale next door (oh come on, the back window was standing wide open) with one of my emotionally unstable neighbors.  It's a long story.  This was the creepy loot they returned with -- 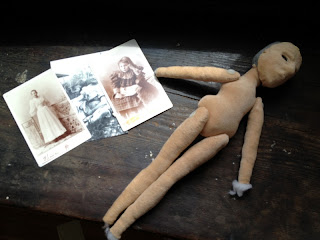 There's also a giant vagina leading into my parlor -- 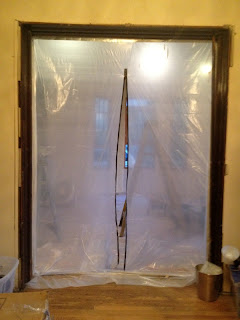 Every time a workman leaves the parlor I throw confetti and yell, "WELCOME TO THE WORLD!"  They may be getting sick of it, hard to say.

On the neighbor front, Angel and Dorita stopped by yesterday.  We chatted out front in the heat until Dorita looked down at her bag of groceries and said, "Oh sh*t, girl, my lettuce is wilting" and took off at a full run down the street.  I hope her lettuce is okay.

Widower Peter is thrilled Contractor God is a fellow Englishman so lies in wait for him.  Contractor God has therefore started slinking around the house behind the bushes to avoid being seen.  When Widower Peter catches him, he chats to him for hours while I stand at the window and mouth, "I'M NOT PAYING YOU FOR THIS."

I met an incredibly normal family who lives two doors down.  They have small kids.  They brought us dessert and a "Welcome to the Neighborhood" card.  They smile all the time.  There is definitely something wrong with them, and I'll let you know as soon as I find out what it is.