Sleepless in the C.D. 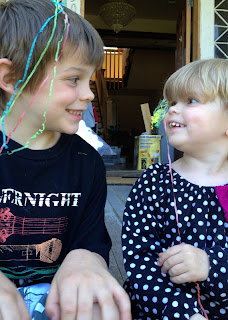 Oscar celebrated the Fourth of July by running away.  Fireworks are not Oscar's thing; an unfortunately- timed firecracker paired with an open front door equaled Oscar's freaked-out butt moving at high speed away from the house.

We jumped on bikes, jumped in cars, jogged all over the neighborhood calling his name.  He doesn't yet have a tag with our address on it.  He also has serious pancreas problems; we were filled with horrible visions of someone kindly tossing the scared little doggie something from their grill.  By the time we found him, would it be too late?  Would it be death by burger?

We spread the word amongst neighbors we barely know.  Several volunteered to walk around the neighborhood looking for him.  One heavily tattooed man and matching girlfriend said they would go home and get their chihuahua and walk him around -- maybe their dog would lure our dog out of hiding.  I thanked the cooler-than-me couple for offering their chihuahua as bait.  They may be questionable dog parents but they are very good neighbors.

Hours later, with Alex once again in the car driving slowly through the neighborhood whistling for him, Oscar came walking back into the yard casually like nothing happened.  We were so happy he was home.  But what a little jerk.

We now clip Oscar to a leash that's tied to the house as soon as someone opens the front door.  He would prefer more freedom, but that's the price you pay for exercising your independence on Independence Day, schnauzer.

Other than the dog snafu, our Fourth of July was bizarrely wonderful.  One of the first things we saw that morning was a man in an electric wheelchair with lit sparklers sticking out the back zooming down the sidewalk hollering "HAPPY 4TH OF JULY, YEEEAAAAH!"

The neighborhood party was held at the small rental house behind Banister Abbey, the house on which I've already called 911 for what appeared to be an explosion in their kitchen.  I now realize they were just getting warmed up for the 4th of July.  I called 911 way too early because what I witnessed a week ago was nothing compared to what happened on the 4th. 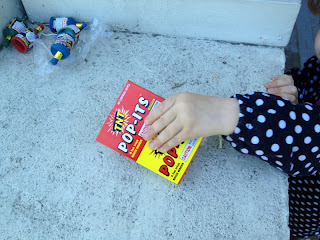 Everyone was friendly at the party, happy to meet us, happy to talk about Banister Abbey.  It quickly became clear that if this neighborhood were a family of houses, we just moved into Grandma.  The neighbors have an eye on us and are making sure we're treating her right.

The party was a true Central District party.  I'd never been to a party where minorities make up the majority of the guest list until then.  There was also the need for several translators.  But even though we all looked and sounded a little different from each other, everybody loves beer.  We drank it together and smiled.  I always knew -- beer makes the world a better, more unified place. 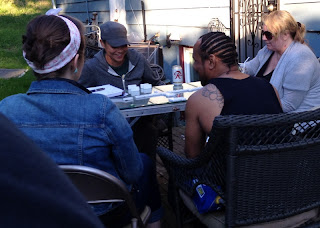 Dominoes, too.  All my neighbors play dominoes.  I never believed that was a real game.

We left the party at 10:00 to put the kids to bed.  The guy who lives in the rental house, Rusty, yelled after us, "Try to put them to bed if you want but probably not gonna happen -- it's about to go off out here! Nobody sleeping in the C.D. tonight!  HA HA HA HA."

Rusty was right.  The neighborhood's arsenal was the most impressive I've seen at a neighborhood Fourth of July party.  Our neighbors pool their money and do it together every year, seven years running now.

Lucien, Alex and I sat on our balcony and watched the insanity until the wee hours of the morning.  The fireworks lasted until 2:00 a.m.  At times there were ten, twelve, fourteen going off at one time in our stretch of block alone, all exploding directly over our house.  (That's where more beer came in handy -- to cloud the visions of one of those things tipping over and firing into the side of The Abbey.) 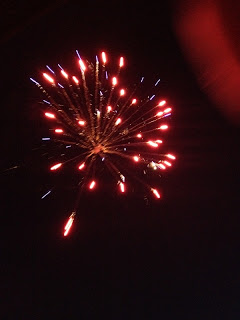 It was insanity.  Nobody slept in the C.D. that night.  Happy Birthday, America, you freak

In very sad news, the artists next door are gone.  Turns out the artists weren't so much "renters" as "squatters" so the Sheriff came over and not-so-kindly asked them to leave.  It made a few things more clear in my mind -- such as, what I read as environmentally conscious artists who wouldn't use electricity at night were actually artists who had no electricity.

The owner is now throwing the artists' stuff all over the front lawn in the hopes people will take it.  There's a sweet pair of red Vans, mens size 12, if anybody wants 'em.  I took a beautiful suede jacket that has about thirty years of grime on it and which I will probably never wear.  I just wanted something by which to remember those beautiful artsy squatters.

The owner of the house is a piece of work.  The artists warned me about her.  I had my first run-in with her the other day and they were right -- she's a sociopath devil woman.  I'd love to write about it now but I'm still pretty sleepy from the 4th. 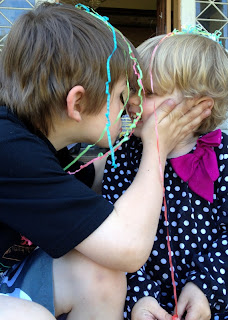 Hey, anyone got a forwarding address for that dark-haired Adonis?  I'd like to send him a lock of my hair and a perfume-scented letter,
MJ
Posted by MJ at 9:57 PM