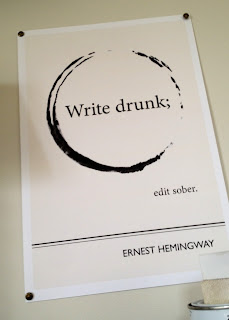 My memoir writing class is almost over, just one week left.  It's been a very positive experience if you don't count my assignments being returned with critiques such as "MJ, YOU TOTALLY BLEW THE FIRST AND LAST LINES AND THOSE ARE MOST IMPORTANT GIVE UP AND GET A JOB HIPPIE."

To some of our more sensitive classmates, our teacher's harsh (and mostly spot-on) critiques have proven too much and they have dropped out. I relish the criticism, though, because it's the only way I'm going to learn to stop using so many goddamn opening clauses.

"SO MANY GODDAMN OPENING CLAUSES, ARE YOU BORING YOUR READER TO DEATH ON PURPOSE OR IS IT JUST CRAPPY WRITING NOW GO CRY IN A CORNER, LOSER."

A fellow classmate and I attended the "Cheap Beer and Poetry" event downstairs at the literary mecca where I take my class.  It's a regular event and a popular one.  Rainier beers were $2 and deliciously watery as usual.


One poet recited a poem about a saggy old barn.  It had a terrific opening line --"Barn got its lean on" and got better from there.  The poem introduced me to a new feeling -- desperate and profound sadness for a barn.

Another poet broke the ice first by telling a joke --


"A young man walks up to his grandmother and says, 'Grandma, have you seen my bottle of pills?  They're labeled 'LSD.'"  And his grandma says, 'FORGET YOUR MOTHERF*CKING PILLS THERE'S A DRAGON IN THE KITCHEN.'"


My parents came for a visit last week.  I am grateful --  Alex has been traveling for work for the past two weeks and I'm losing my mind caring for our hooligan children alone.

Alex's travel took him to China, Japan, England, France, Germany, and Luxembourg this time.  He went all the way around the globe and will therefore be near-comatose upon return.  In good news, he spent a few nights in Paris and saw these people -- 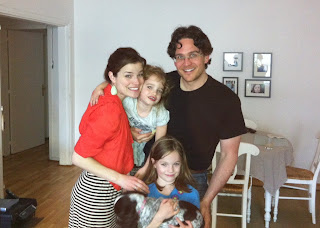 The Return of Virginia Mom.  She lives on, SHE LIVES ON! 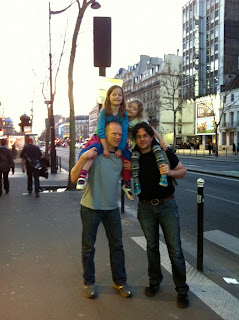 Look at these jerks rubbing Montparnasse in my face

I miss you, Virginia Family.  A lot. My fragile constitution can barely handle the photographs of all you together again, sans moi.  Someday, ma biche, someday...

But anyway, back to my parents.  They are still as good as parents get.  We laugh a lot and talk over each other and never really hear what anyone else is saying.  Mom, as we yammered on as usual, said "Well, once again we've launched into indecipherable conversation." And that sums up most of the visit.

Mom and Dad brought the kids some gifts.  One was called "Flarp!" and it was a "noise putty," which we assumed meant it would make fart-like sounds when we squished it between our hands.  Imagine our surprise when, instead of making funny noises, Flarp glued our hands together with a cold obscenely sticky goo.

As we pried our hands slowly apart, Flarp dripped (Flarp had inexplicably turned into a liquid) onto carpet, clothing, and furniture.  The more we tried to clean it off, the messier it got, the more it stuck, the bleaker the future seemed.  It was a real battle and one that was never truly won -- even after a few washes, Flarp still dots our jeans with fluorescent yellow stringy gobs. 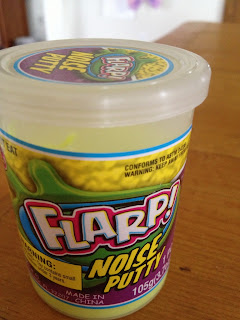 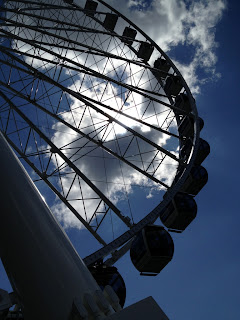 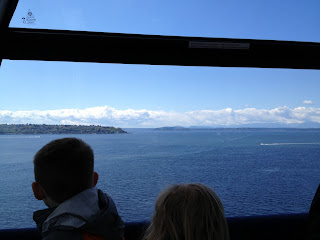 Frankly, I wasn't at my most comfortable, either.  It seems gratuitous to dangle patrons over the water the way they do.  It's like they're taunting us with all the ways we're gonna die if someone screwed up the assembly of the thing.  If the fall doesn't get ya, the drowning will, enjoy your ride! 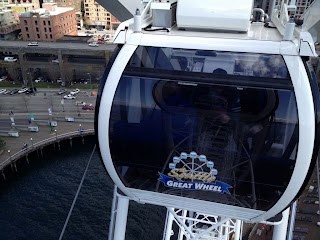 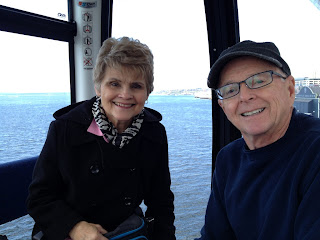 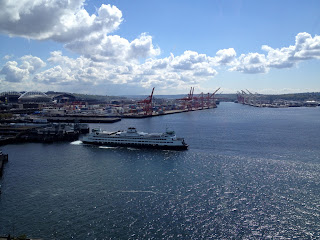 Each cab on the Great Wheel is equipped with a "panic" button you can press if you want off early.  The button idea is better than what you had to do if you panicked on a Ferris Wheel in the good old days -- you just yelled "I'm panicking, I'm panicking!" into the air with nobody around to hear or care.

We also spent some time on Alki Beach.  Lucien did not understand why we were laughing so hard when we took this photo.  He will someday. 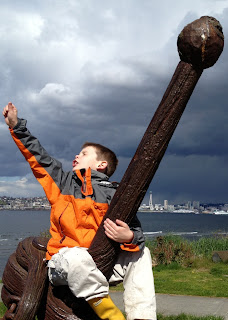 While on Alki, the weather turned.  In one direction, it looked like this -- 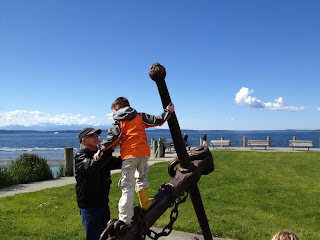 But in the other direction, it looked like this -- 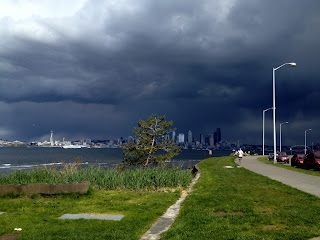 So we got the hell out of there. 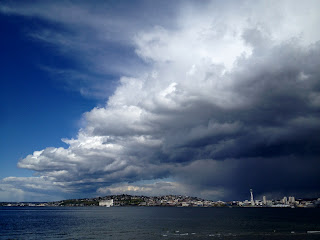 I'm the weather and I'm going to get you

Thanks for coming to save my sanity and give me some much-needed backup, Mom and Dad.
Even if you did bring Flarp. 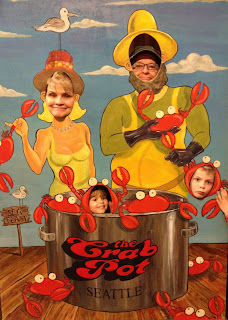 When I first started this blog, I added an email link to my sidebar so people could email me all their wishes and dreams.  After a few months of not receiving any email (save one from Bill), and after trying it myself and it not working, I removed it from the sidebar.  And promptly forgot it had ever been there.

I remembered my failed email experiment last week and, on a whim, decided to log into that email account to see what was there.  And there before me.... emails.  Dozens.  So many wishes and dreams sitting dusty in an email inbox for over a year.  I have no idea where they were the first time around but they've finally shown up to the party.

I don't know if any of you people are still reading, but know if you emailed me in the past 16 months, I didn't get it until last week because I'm a loser.  (WHO USES TOO MANY DEPENDENT CLAUSES, IDIOT.)  I hope to make my way through those emails and answer them.

I've re-added the email link.  If you use it and don't hear from me for over a year, rest assured I've somehow screwed it all up again.

Hug your barns, people, you have no idea what they've been through,
MJ
Posted by MJ at 11:24 AM