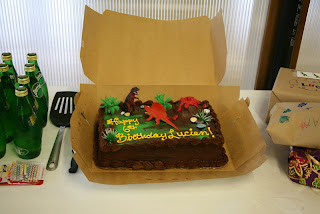 I was standing beside two elderly men at the grocery store yesterday when suddenly one turned to the other and said, "You know, the first time I put on my kilt, I thought 'damn, I've got some nice legs.'  The second time I put it on I thought, 'well, shoot, where did those nice legs go?'"

I love living in English again.  If you're within earshot of me, I'm listening to you.  And even if you don't make a whole lot of sense, I'm giddy about it.

Look at this crazy drama with the school bus. There was a truck parked too close to the roundabout so the bus couldn't make the turn and got stuck.  A fire truck happened by and the firemen jumped out to make sure everyone was OK.  Then the firemen turned on the engine lights to entertain all the kids stuck on the bus and we all said, "Ooooooh."  (Not much happens around here on a weekday afternoon... it was a really big deal, I swear.) 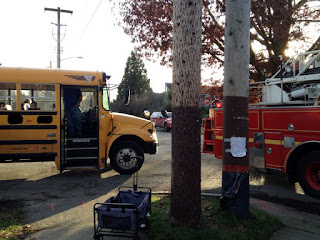 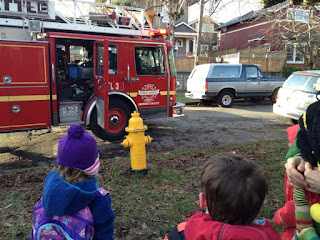 Bear with me, everybody.  Little light on blog material today.
When Lucien was four years old and living in the super-white 6th arrondissement of Paris, he saw an African American boy at the park and asked me if he was burned.  Jesus.  I told him sometimes people are just different colors and he looked at me like I was batshit crazy.

Now that we're home, he gets it, and doesn't care a whole lot.  None of the kids do.  We're happy Lucien now lives and schools with people of assorted colors.  His school is a beautiful rainbow of skin color, a cornucopia of language and ethnicity.  I'm pretty sure I even saw a purple boy in his class but maybe that kid just had measles.

Sometimes adults don't do as well with the concept of race.  I'm sorry to say there's some racial tension in my neighborhood, and it's getting stirred up by the contentious issue of dog poop -- 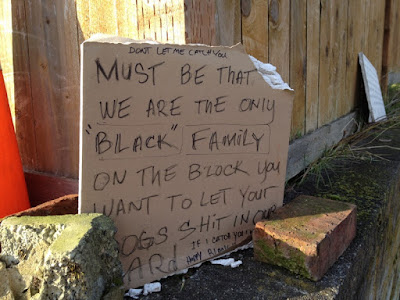 (I'm not sure why "black" is in quotes.)
I hate to think someone is purposely letting their dogs poop in this specific yard because the family is black.  If so, this dog owner is way worse than your average poop-ignorer; this person is a whole new level of shitty (HA!)   If the dog owner is racist,  I hope that person visits Paris, and then I hope they trip and fall face first into a steaming pile of Parisian dog sidewalk offerings.

What?  You want to hear more about poop?  I must obey!

Now that I'm back in a land where picking up dog poop is an absolute duty that must never be shirked, I'm hearing about lots of people having dog poop problems.  L.A. Mom is borderline obsessed with identifying a dog owner that regularly leaves poop in her yard -- obsessed to the point of sitting up all night with a pair of binoculars, a stun gun, and a maniacal look in her eye.

A woman recently left a note in L.A. Mom's mailbox addressed to L.A. Mom's husband.  The note said, "Brian, I need to talk to you.  Call me, Katie."  There was a phone number.  L.A. Mom did not immediately think, as I would have, "Katie is my husband's mistress and I must now challenge her to a duel."  Instead she thought, "OMG, I bet this woman knows something about the dog poop."

L.A. Mom called Katie.  She excitedly dove into her questions -- had Katie seen something in their yard, and did she know who the mystery shitter/owner were?  There was a long silence, as any person not emotionally involved in the poop situation would expect.  Katie then explained the reason for the note in the mailbox.  It was not only NOT related to poop, it was not even related to L.A. Mom and her family.  The previous owner was named Brian, too; L.A. Mom's family has only recently bought their house.

Please, people, take a deep breath.  I implore you, let's not let dog poop cloud our reasoning and make us suspicious, angry people.  Let's not be racist.  And let's all just pick up our dog's crap, okay?


Lucien, my recently turned six-year old, after three years of Eurodisney, finally had a real birthday party.  Us being us, we made it a DANGEROUS birthday party -- 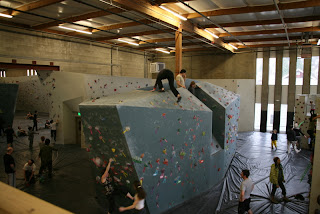 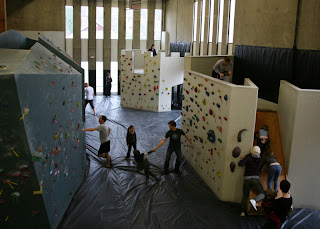 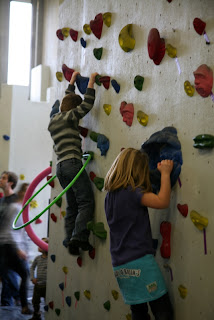 The birthday boy climbing through a hoop

Here are the rules for birthday parties at Seattle Bouldering Project -- 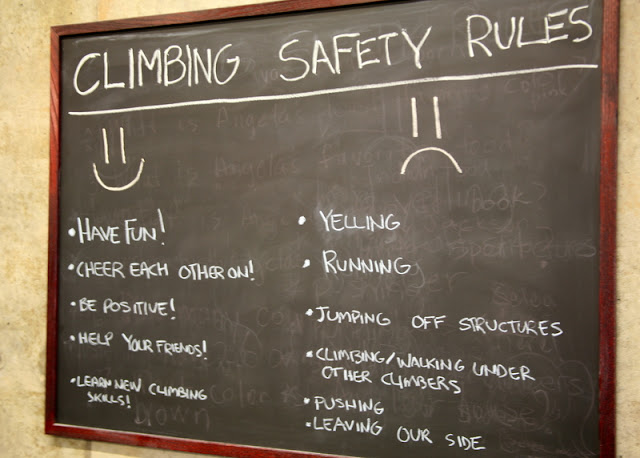 Here's what happened at our party -- 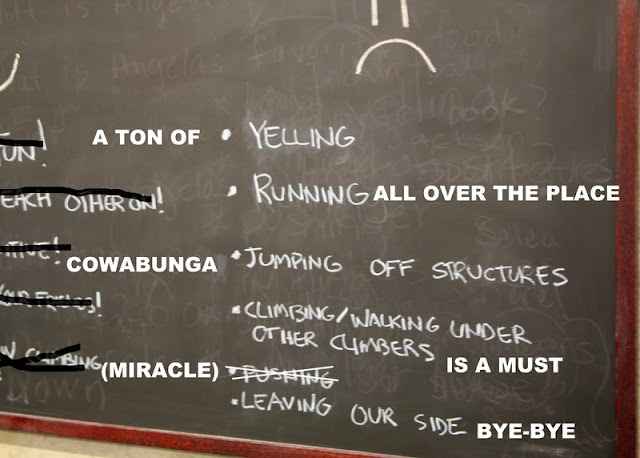 This was Lucien's cake -- 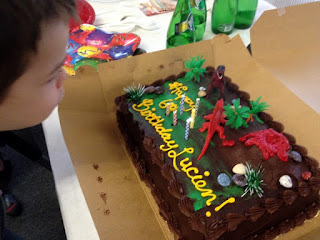 Dinosaurs, volcano, edible "rocks"
A mother of one of Lucien's classmates asked me if I baked it myself.  She doesn't know me so didn't realize how funny the question was.  Alex however, who was standing nearby, nearly passed out from lack of oxygen due to maniacal laughter.

Today at the bus stop after school one of Lucien's classmate's moms said, "Hey, does Lucien want to come over for a playdate now?" and I said, "Yes, take him."  I love this neighborhood, even if there are some questionable dog owners with possibly racist evil intentions.

Alex is in Europe right now for work.  Today he's in Munich; tomorrow it's Paris.  He's in Paris for less than 24 hours so I know he won't be having any fun but still, I wonder how tomorrow will feel for both of us.

He should probably go get liquored up and yell at cars on Boulevard Saint Germain so he can say goodbye to the city properly.  Always worked for me.