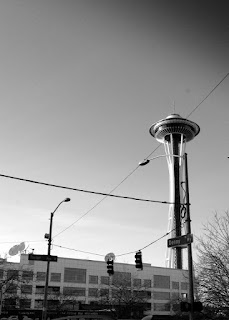 We were all sick over the weekend with a "death must be better than this" kind of illness.  Alex decided he was sicker than the rest of us (he wasn't) and slept all day, leaving me to fend for myself with two kids who passed the time by throwing up on me.  and the furniture.  and the floor.

I would occasionally drag myself to the bedroom door and yell at the prone figure on the bed, "WTF, AL?  I'm sick, too, why am I dealing with this alone??"  He'd mumble something like, "Seriously, MJ, I think I have it a lot worse." (he didn't)

It's kind of like the house caught on fire and Alex jumped out the window to save himself while the rest of us stared after him and whimpered "Daddy....?"  He's hanging his head in shame now and singing my praises, declaring me "much stronger" than he is.  Agreed, bed boy.

We're all fine again but the place still reeks of sickness and misery.  I've washed all sheets and towels a million times and Alex is getting upset because I keep spraying him in the face with Febreze.  Here's hoping we get accustomed to U.S. germs very soon.


Anyway, before it all went to hell healthwise (again), we went to the neighborhood post-holiday party.  By "the neighborhood" I mean the neighborhood where we're trying to buy the goddamn house.  Everyone on the street knows so much about us and our now ten-month-long headache, we're even getting invited to the street's parties.  We're de facto neighbors (better than "insane wannabes").

What a great group of people on that street.  Some are still knocking themselves out to do "blog-worthy" things, though.  One friend, Seattle Dad, tried coming out as a proud homosexual man at the buffet table.  Man, I sure hope he wasn't serious -- otherwise the eye roll and the "I still ain't putting you in the blog, dipsh*t" probably weren't very sensitive responses.

Things are going very well for the Loosh in U.S. kindergarten.  I don't have time to get into the differences between his two schools just yet, but am happy to say that being loud does not equal being bad here.  Huzzah!  His teacher likes him, kids like him, smiles all around.

Unfortunately, he's lost his "self manager" badge already (this is apparently a very big deal to the kindergarten set) because he kicked some kid named Finn, but every day at the end of school he promises his teacher he's going to try "super harder" to earn it back the next day.  She ruffles his hair and tells him she knows he will.  He's happy.

But hang on, hang on -- there's homework in kindergarten?  That's insanity.  It's not "draw a pretty kitty cat" kind of homework, either.  One of his math problems was "draw a symmetrical picture that has 2 squares, 2 circles, and 3 triangles."  I read it to him and then we looked at each other with question marks in our eyes.  He slowly asked what "symmetal-cul" meant and I agreed that was a good place to start. 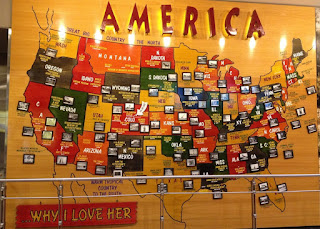 I've come to the conclusion there is no such thing as "reverse culture shock."  This is the culture in which I've lived my entire life -- three measly years somewhere else isn't going to shake it out of me.  Maybe if you lived outside your culture for twenty years it would be different, but what we're experiencing now is nothing like real culture shock, the kind where you get smacked around and your head dunked in the toilet by totally new things.  This is more a slow, "ohhh yeeeeah... I remember that now."

So no need for the dramatic term -- there's no "shock," just "getting-to-know-you-again, culture, and by the way, you look lovely today."  It's like putting on your favorite pair of jeans straight out of the dryer.  At first it's "What the hell's happening here?" but soon enough it's "These jeans are nice and roomy.  So comfy."

Hope I can write again soon, but I may be too busy helping Lucien understand particle physics.
(Kindergarten's not for the weak, people),
MJ
Posted by MJ at 5:26 PM