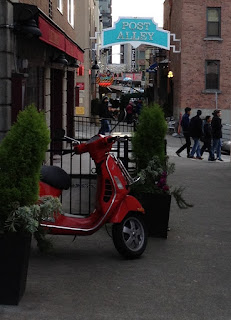 We watched the Golden Globes last night.  It was like watching a Golden Globes broadcast beamed down from an alien planet because we didn't know the films, TV shows, or actors mentioned.  After every close-up of a nominee's face, Al and I would say in unison, "Who the hell is that?"  Then we turned off the TV and went to bed because we realized we didn't care.

Speaking of returning ex-pats lost in the homeland,  I am thrilled to announce I've been re-united with my Paris friend, L.A. Mom.  She lives in Seattle now, moved here six months ago.  She's been waiting for me.  We went out for beers Friday night and my face hurt for a full day afterwards because of the laughing.

L.A. Mom has a crazy job in Seattle.  She's a math teacher but works at a hippie school.   I like hippies, in fact consider myself a hippie enthusiast, but after talking to L.A. Mom I don't think I want them teaching my children.

When I asked about a typical day for her daughter, who attends kindergarten at the (crazy expensive, by the way) hippie school (for free, because she teaches there) she said "Well, they take a long walk." It's her understanding they walk to the park and play with sticks.  They've been building a fort thing for awhile, but have recently discovered homeless people sleeping in it.  (At least there's one beneficial, if completely unintentional, socially-conscious component to the crazy expensive walk to the park.)

L.A. Mom, along with all the other teachers at the school, has to attend regular meetings in which everyone sits in a circle, drinks tea and discusses their feelings.  Sometimes there are presentations.  After the presentations, the teachers are asked to journal and draw a picture expressing how they feel about what they heard.

After a recent talk on the three parts of reproduction (sperm has three parts, egg has three parts, apparently it's more complicated than any of us ever knew, and I have no idea why teachers are talking about this), L.A. Mom didn't know what to draw.  She ended up drawing some circles, hoping it would pass as some circle-of-life sh*t or whatever.  She glanced over at a co-worker's page.  He'd drawn a rainbow.

Rainbow Guy caught her looking at his page so L.A. Mom told him she liked his drawing.  He shrugged, lowered his voice and told her it's what he always draws.  Every time there's a presentation and he's asked to draw his feelings, he just draws a rainbow and everyone tells him it's beautiful.  L.A. Mom and Rainbow Guy are friends now.

I was reunited with another old friend over the weekend, too.  I worked with her back when Al and I were first married.  I was working as a stock trader back then.  I can't really believe it either.

The Loosh and my stock trader friend's son were similar boys energywise before we left for France.  We were happy to discover they still are.  You can barely tell the two boys apart as they smack Al's butt in unison. 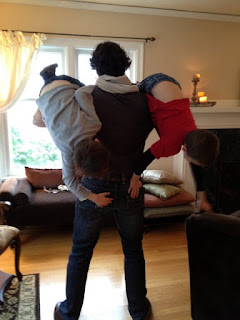 My friend's dad used to be an actor and very involved in the local theater scene.  She tells me he's no longer an actor, though;  now he's an "elderly model" and is currently featured in an ad for a clothing line created for chronic undressers. (this is apparently a real affliction in which elderly people can't keep their clothes on.  Horrifying stuff.)  She became aware of his most recent modeling gig when she flipped through a catalog and saw a picture of her dad sitting in a wheelchair, dressed in a shirt that buttoned up the back with a bowl of Cheerios on his lap.

We had a pretty snowstorm in Seattle yesterday.  There's much, much more snow coming, which probably means school closure, which would be a lot of fun if I hadn't jam-packed this week with stuff I MUST DO WITHOUT THEM.  So OK, none of it will get done and life will go on. 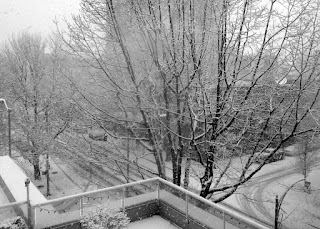 I walked down to Rite-Aid yesterday and there, tucked next to the Snuggies and the Pajama Jeans and some product called "The Forever Lazy," I saw this -- 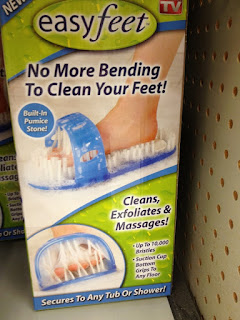 Now I know how to answer when someone asks me how French people stay so thin.  I'm going to say "they're willing to bend over to wash their own feet."
You've got to help yourself, America.  Jesus.
Snowmageddon on the way.  I'm going to go draw a picture expressing how I feel about that.
(It's a rainbow)
MJ
Posted by MJ at 2:36 PM