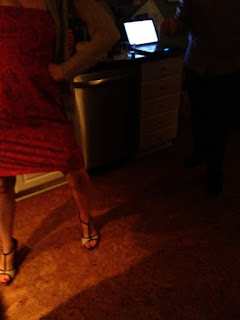 The Frenchies have returned to my life.  It's not a second too soon, either, because Lucien's French is now rusty at best.  He still has it inside his spongy little kid brain, but it's also been leaking out of that sponge at a rapid rate since our return.

I tried signing him up for a class for fluent kids at the Alliance Francaise.  I received a call a few hours before the first class was to begin. The woman on the other end spoke earfuls of French at me -- French for which I was not prepared.

"What's happening to me?  I'm frightened!" my brain begged inside my head.  My brow was so furrowed I think my hairline touched my eyeballs.

After several long confusing moments, I was able to retrieve and plug back into my French mode.  I then understood Lucien's class was cancelled because Lucien was the only one signed up for it.  I wish she would have told me that a week earlier, when registration ended and it became clear no one else was going to enroll.  Instead, she hung onto her little secret until the last minute.

My annoyance at a French woman and the language confusion really took me back to our Paris days.  (Has it really been five months back on U.S. soil already?)

We signed Lucien up for a private tutor instead.  After his first lesson, his teacher, an adorable young French woman I'll call Mademoiselle Mimi, told me Lucien's vocabulary is shockingly bad for having spent three years in Paris.  During one exercise, she pointed to a picture and asked, "Where's the giraffe?" and Lucien pointed to the dog.  When she asked "where's the boy?" Lucien pointed to the girl.  He didn't get one question correct.

As she told me this, Lucien started laughing like a madman.  He seemed suspiciously pleased.  Mlle. Mimi then slowly turned towards me and said, "I'm just now realizing he may have been messing with me," and I nodded, "Yep, that's likely."

Welcome to The Loosh, Mademoiselle Mimi.  Don't be too distressed by the premature gray hairs about to sprout all over your head.  They're like little merit badges. 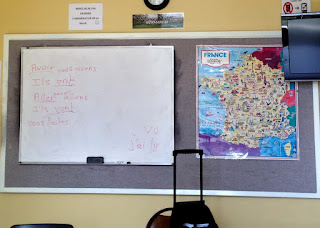 Lucien's school's PTA fundraising auction was Saturday night.  We sat at a table with some of our favorite friends which is never a dull time.  But the most exciting news is I bid a bunch of money and won Lucien's class project, a watercolor collage thing they created especially for the auction.  It was a battle between all the parents in the class to win it, so now I have many enemies I will see on a regular basis.  I am an island!

Here it is.  It's called "Bamboo Forest."  Lucien's piece is in the upper left hand corner.  It surprises no one his contribution looks like someone giving the world the middle finger -- 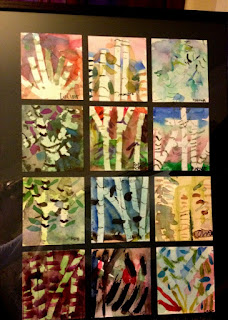 The bamboo says "screw you."


Chalk it up to "anything goes" Seattle, but one of the items up for bid was a vasectomy from "Dr. Snip."  The highest bidder also received a bottle of whiskey and a bag of sex toys from renowned Seattle sex shop, Toys in Babeland, to go along with it.  A guy won the whole package (HA!) amidst many hoots and cheers and, finally, some high-fives. 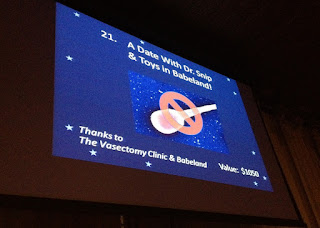 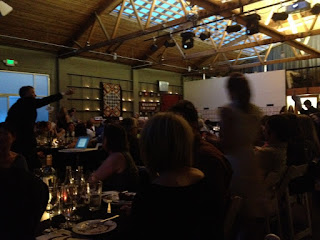 Since we all still had our babysitters for another hour after the auction ended, several of us had a nightcap at Seattle Mom and Dad's house.  There was dancing in the kitchen.  It was amazing, especially Alex's trademarked "lobster dance" and the off-rhythm clapping and "over zee borderline" Madonna lyric sung by German Seattle Dad. 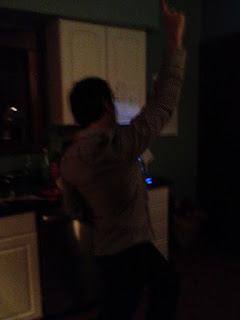 "Every time I have fun it ends up on the internet."
-- Al, unfortunate husband of a blogger


And finally, here's my toothless wonder -- two teeth lost in the past 48 hours. 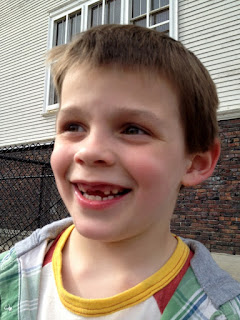 Now he talks with a cute little toothless boy lisp.  I would freeze the moment if I could -- and if he otherwise wasn't being a total beast on a daily basis.

Toothless boy,  you know damn well where that giraffe is...
MJ
Posted by MJ at 7:04 PM